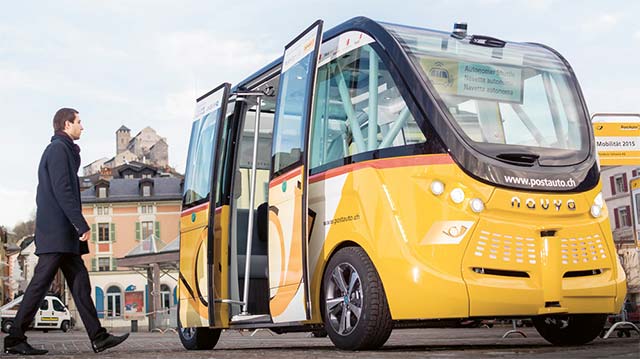 The need for the auto industry to speed up the switch to electric vehicles increased further today, as national postal companies Swiss Post and Austrian Post committed to electrify their delivery fleets by 2030.

The national flagship companies – delivering daily postal services to millions of customers in Austria and Switzerland – have joined the global electric vehicles initiative EV100 which aims to make electric transport ‘the new normal’ by 2030.

EV100 is led by The Climate Group, the international non-profit focused on accelerating climate action. Other new members announced this week are Portugal’s EDP and New Zealand’s Meridian Energy.

Together, the four companies will switch 22,000 fossil-fuel vehicles to electric. With two out of three new cars in Europe being sold to the private sector, business commitments to electric vehicles send a clear signal of demand for EVs to automakers.

The news comes as the global auto industry gathers at the Geneva Motor Show, where brands like Honda, Mercedes-Benz, Volkswagen and KIA are set to exhibit new electric vehicles – but combustion engine models continue to dominate.

As the need to tackle climate change becomes ever more urgent and many cities look to address air pollution by introducing low or zero emissions zones limiting access of polluting vehicles, companies are switching to electric vehicles to lower business risk and future-proof their operations.

Austrian Post is the largest logistics business in Austria. The company already operates the largest electric vehicle fleet in the country and will switch more than 9,000 vehicles to electric as part of EV100. Committing to go fully electric through EV100 will drive innovation and ensure long-term competitive advantage for the business.

Post CH Ltd (a subsidiary of Swiss Post Ltd) will switch more than 10,000 vehicles to electric under EV100. To accelerate climate action and to reach carbon neutral delivery, Post CH sees investing in a modern fleet of vehicles with energy-efficient, alternative drive systems and a well-designed logistics strategy as key.

Post CH has already electrified its mail delivery fleet consisting of 6,000 electric three-wheeled vehicles and now wants to switch 4,600 delivery vans (up to 3.5t) and 180 service vehicles to EVs by 2030, if market supply and operating and real estate conditions allow. All of Post CH electric vehicles are 100% powered by “naturemade star”- certified renewable energy from Switzerland. Furthermore, Post CH supports the uptake of electric vehicles by its staff by installing charging infrastructure at its largest sites.

EDP has committed to switch a fleet of more than 3000 vehicles to electric. This transition has already begun and will now be accelerated to reduce CO2 emissions by 70%.

The company has an overall target of reducing its CO emissions 75% by 2030, from a 2005 baseline, and sees electric transport as a key part, alongside with investment in renewable energy and energy efficiency for both its own operations and customer products. Sustainability is a core part of EDP’s DNA and continuing to grow while meeting the challenges of sustainable development is a commitment the company has with its stakeholders.

Meridian Energy will switch its fleet of 35 vehicles to EVs and install charging facilities at its offices. The company already operates a 50% electric fleet and sees a strong business case.

The EV fleet costs Meridian Energy the same in capital expenditure as its previous fossil fuel fleet, has lower running costs and higher residual values. On average, the company is saving around US$ 3400 (NZ$ 5000) a year on maintenance and fuel costs for each vehicle.

With these and other commitments from a growing number of international businesses such as Deutsche Post DHL and LeasePlan, The Climate Group is seeing the electrification of more than two million vehicles by 2030 through its EV100 initiative.

A recent report from The Climate Group on the impact of the EV100 initiative so far revealed that cutting air pollution, reducing greenhouse gas emissions and generating financial savings are among the top drivers for business switch to EVs.