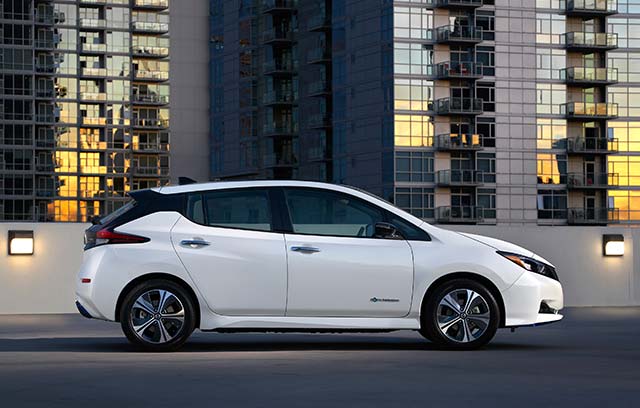 Nissan has announced a wave of new versions and upgrades to the Nissan LEAF electric vehicle range, making Europe’s top-selling 100% electric car more appealing than ever.

Following the runaway success of the LEAF e+ 3.ZERO Limited Edition, Nissan has made its longer range version available as a permanent addition in the Tekna grade.

Ken Ramirez, Senior Vice President, Sales and Marketing Nissan Europe, said: “At Nissan we are incredibly proud that the Nissan LEAF was the number one EV sold in Europe in 2018 and continues to be the best-selling EV this year. We believed in electric mobility in 2010 when we launched the Nissan LEAF, the world’s first mass-produced electric car, and we still believe today. More importantly, more than 130,000 Nissan LEAF drivers in Europe also believe, and they are our most satisfied Nissan customers.

“Today we are announcing the LEAF’s full line-up for Europe, including the e+, which will raise the bar again. Together with ProPILOT and advanced connected services experience, our next generation Nissan LEAF truly is an icon of Nissan intelligent Mobility.”

Nissan’s latest longer range version made its debut to much acclaim with the unveil of the Nissan LEAF e+ 3.ZERO Limited Edition in January 2019. This model has an estimated range of up to 239 miles on a single charge and an impressive 217 PS power output allowing acceleration from 0-62mph in 7.3s. This version is equipped with ProPILOT advanced driving assistance technology as standard.

Within 24 hours of unveil, 1,282 orders were taken from the initial 5,000 cars available for sale in Europe. This recent sales success follows a record-breaking year for the Nissan LEAF, which topped EV sales in Europe in 2018 and became the best-selling car overall in Norway. To date, more than 400,000 LEAFs have been sold globally since 2010.