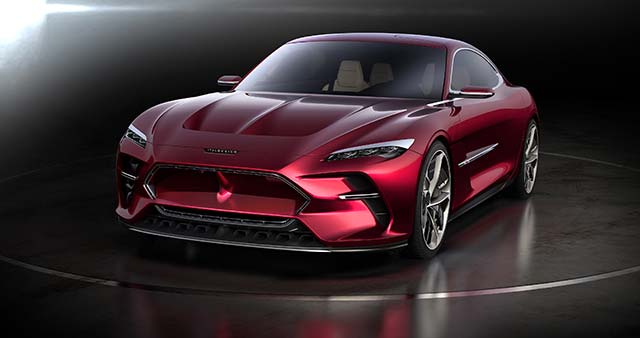 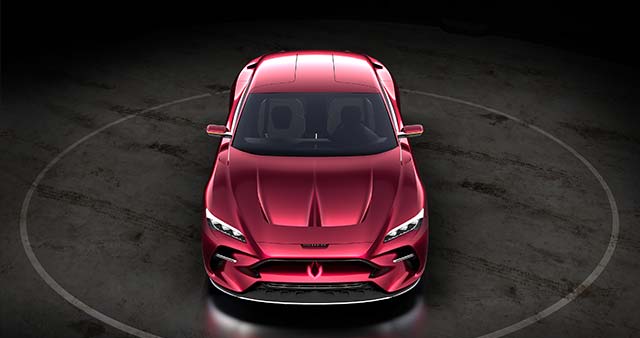 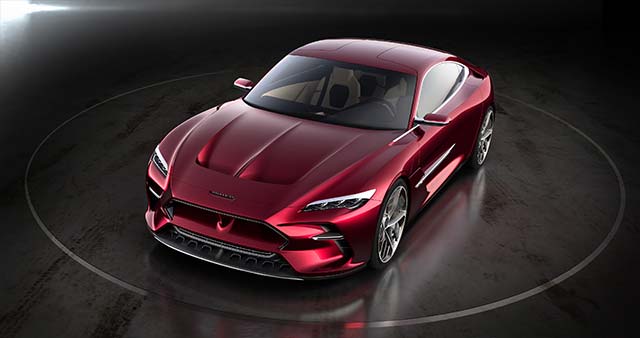 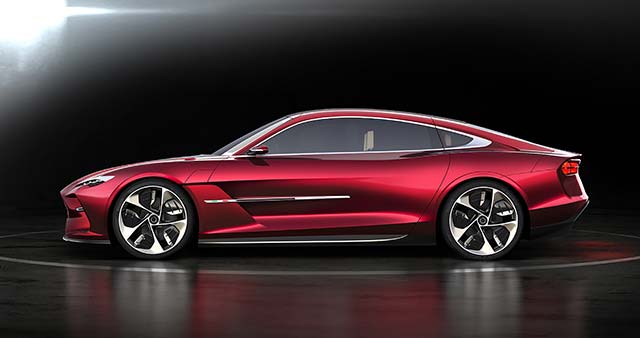 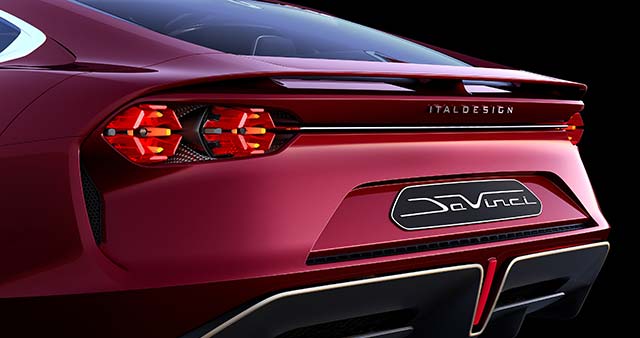 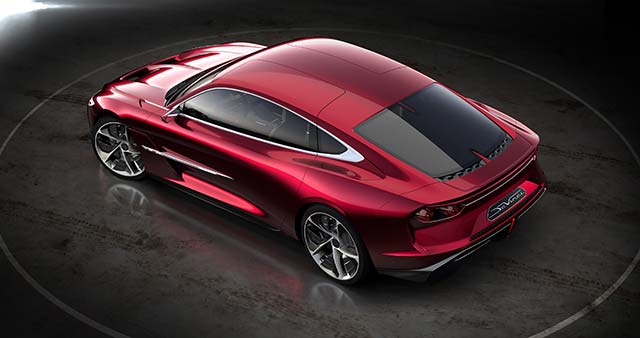 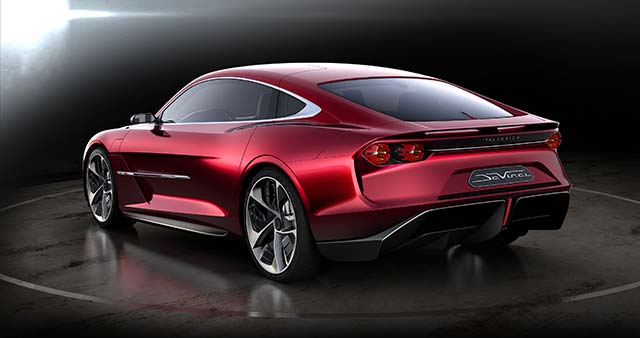 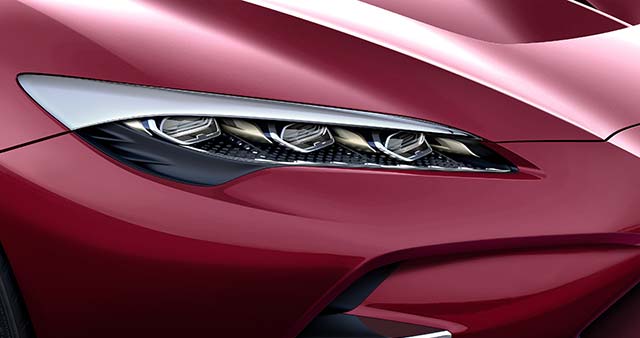 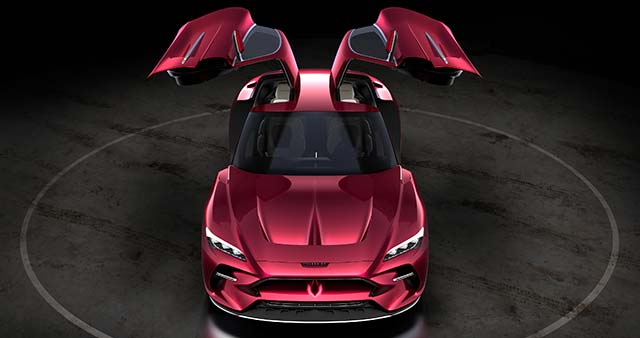 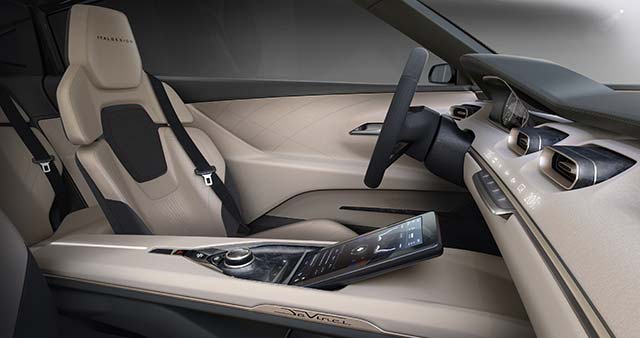 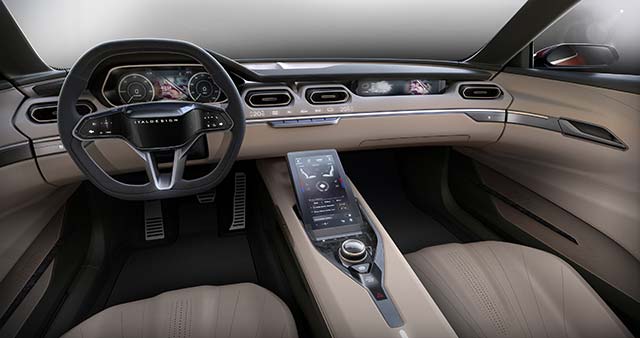 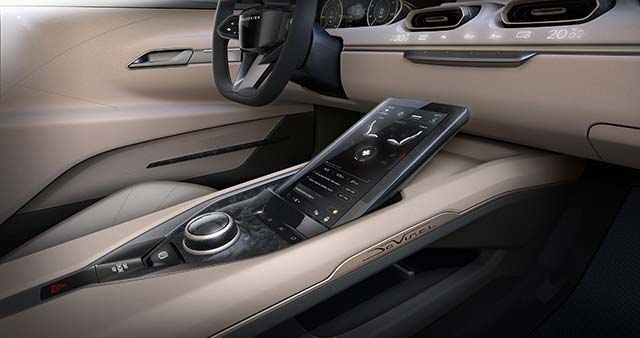 In the five-hundredth anniversary year of Leonardo’s death, Italdesign is dedicating its latest showcar, the Italdesign DaVinci, to the Italian genius.

The DaVinci is a design concept for a Gran Turismo with a 100% electric drive. Its sporty nature combines with utmost refined elegance in both its exterior lines and interior design, placing it firmly in the premium segment.

Measuring 4,981mm in length and 2,124mm in width, it can comfortably seat four passengers. Its 2,900mm wide wheelbase and reduced overhangs confirm its sporting focus also in aesthetic terms, emphasised by a ground clearance of just 119mm.

In keeping with its tradition, the Italdesign Innovation Design Department headed by Filippo Perini, conceived the design of this concept car so that with just a few adjustments it can easily be adapted to series production and the family feeling of several brands. The few ‘exotic’ features typical of a showcar are concentrated in the expansive gullwing doors, which allow both the front and rear seats to be accessed at the same time, as well as in the rear optical units and aerodynamic lateral tailfins integrated in the doors.

“We wanted to pay homage to Leonardo’s genius by symbolically dedicating this vehicle to him,” explains Filippo Perini, Head of Innovation Design. “Leonardo was an ante-litteram engineer, an eclectic personality whose interests ranged from painting to sculpture, architecture, graphical design and experimentation. His eclectic approach is a strong inspiration for our day-by-day work”.

“Every showcar made in Italdesign is the manifesto of our activities, skills and competences and the result of a 1,000 people teamwork – continues Jörg Astalosch, CEO of Italdesign. All our units are fully engaged in these projects: Styling, Engineering, and, of course, the Showcar Construction Department, where technology and craftmanship combine to build up a car that is unique in the world”.

The Italdesign DaVinci has been 100% conceived, designed, planned and built at the Company’s Moncalieri plant, in Italy.

Biodynamic design as an inspiration for the exterior styling

“The design language of the Italdesign DaVinci draws inspiration from the shapes created by nature – Filippo Perini, Head of Innovation Design, stated – Its curvy, yet muscular lines combine to form intersections of volumes, rather than a juxtaposition of planes, with the full/empty dichotomy that livens up the vehicle’s styling”.

Contrast is a key aesthetic leitmotif of the DaVinci’s overall design: the final effect is that of a classic, harmonious, well-proportioned and elegant premium vehicle, while some details, such as the front end or rear optical units, represent strongly discontinuous elements.

The fully electric setup has allowed the designers to reinterpret some elements of Italdesign’s recent models, taking them to extremes. For example, this is the case of the Y Duct, included for the first time in the 2017 Zerouno. The DaVinci’s bonnet air duct system is clearly a more prominent feature. Since no traditional radiator grille had to be incorporated, the apertures that form the Y Duct in this case occupy much of the vehicle’s front end and bonnet surface, determining its general design.

The hexagonal element, introduced for the first time in the 2016 GTZero and included in all subsequent Italdesign vehicles, is back in the DaVinci, both in the bonnet’s air intake and in the rear optical units, where the biodynamic design inspiration is most in evidence. The rear headlamps, based on OLED technology, are composed of six ‘petals’ that form a hexagonal frame, enclosing ‘pistils’ that incorporate the direction indicators and backup lights.

The vehicle’s rear end expressly evokes the Italian GT tradition, featuring a classic truncated tail, which combines an aesthetic element with aerodynamic function. The active spoiler, located above the optical units, features a wraparound design, extending to the sides.

Interiors: quality is the true luxury

The interior design is in keeping with the DaVinci’s premium positioning, combining technology with exclusive materials, emphasising passenger space as a true added value.

The asymmetrical dashboard is slightly turned towards the driver. There are three screens: one replaces the instrument panel behind the steering wheel, another is located in front of the passenger and a third and larger unit is above the central tunnel, incorporating all major functions, from infotainment to travel data, from climate control to driver and passenger comfort. Passenger compartment climate control is regulated through hexagonal vents set into the dashboard. Thanks to the partnership with Alcantara, a registered trademark of Alcantara S.p.A., the Color&Trim Department has successfully transformed the upholstery of the central part of the dashboard into a display surface. The icons for the underlying buttons and vehicle temperature gauge emerge back-lit from the Alcantara fabric.

In the rear section of the central tunnel, the Alcantara fabric instead becomes fully interactive: the rear seat climate control buttons are directly integrated into the upholstery.

The balance between technology and exclusive materials, which ensure a warm, comfortable environment, is struck in view of the needs of customers of this type of vehicle, who prefer quality materials, sophisticated finishes and attention to refined details over the quantity of information and possible settings.

DaVinci: an eclectic project, not far from series production

The DaVinci has been developed by exploiting the potential of a typical electric platform capable of housing two motors, one on the front and one on the rear wheel axle, and batteries within the floor of the chassis and, carrying on the inspiration from Leonardo, Italdesign approached this project in the most eclectical way possible.

With few changes, avoinding for example some of the exotic solutions typical of a showcar, DaVinci might be ready for a series production and fit different platforms developed by different brands.

“Italdesign is a service company for the mobility industry – concludes Jörg Astalosch – the projects we unveil during the motor shows are never an end in itself. In 2017 and 2018 we demonstrated we are able to enter the market of ultra-limited series production with the Automobili Speciali brand and the Zerouno project. This year we go back to our roots: the aim of the DaVinci is to stimulate the industry with a concrete vision and quickly ready-to-go. This design, with some small changes, can even fit a traditional platform with endothermic engine; because this is exactly our mission: to provide OEMs with new solutions and innovative ideas to trigger the markets”.

Innovation Desing and Engineering departments worked together to develop a version for an internal combustion engine platform with mechanical transmission. The main modifications for this solution of course relate to the front end, which in this case takes account of the location of the radiator and front engine, without changing the general design and in the interiors with a redesign of the central tunnel to house transmission and cardan shaft for the all wheel drive. This combustion engine version was developed around a generous 4-litre V8.

A world debut of a brand new special Pirelli tire version frames the launch of DaVinci: ‘Elect’ labels tires developed specifically for electric and plug-in hybrid vehicles. These special tires are the result of a particular balance between various technologies, allowing to offer a low rolling resistance to maximize the autonomy of the vehicle, as well as a reduction of the rolling noise so to enjoy the drive at full and an immediate grip delivered since the idle, necessary to support the torque of electric motors.