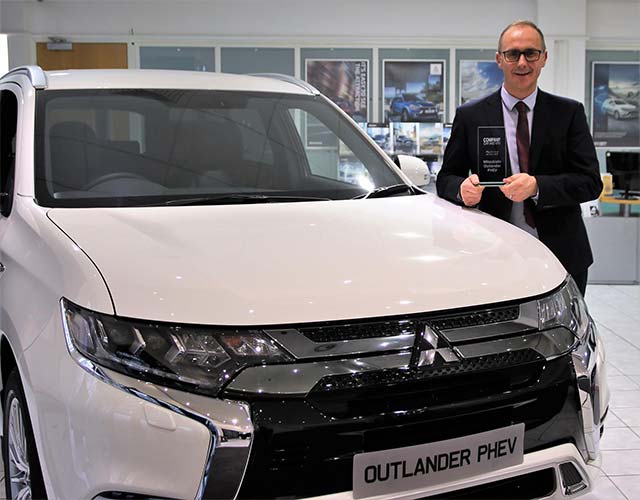 The Mitsubishi Outlander PHEV has been crowned ‘Best Plug-in Vehicle’ for 2019 by Company Car and Van magazine. The award was presented recently at the headquarters of Mitsubishi Motors in the UK, which is based in Cirencester, Gloucestershire.

Thanks to ultra-low emissions of 40.3g/km and its EV range of 33 miles, the Mitsubishi Outlander PHEV also attracts the lowest possible Benefit-in-Kind taxation rate of 13 percent.

Company Car and Van is a motoring magazine and website aimed at the managers of small to medium fleets and company directors with vehicle fleets less than 100 units. This is the inaugural awards presented by Company Car and Van, making the Mitsubishi Outlander PHEV the very first vehicle to receive this award.

Andrew Walker, Editor and Publisher, Company Car and Van said: “Whilst the original Outlander PHEV offered customers a very useable and viable electric range, the 2019 version has been technically enhanced to give an even better real-world performance. Whilst the gains may not seem much, trust me, it makes a big difference, especially if you can plug-in at home or at work. The Outlander PHEV also comes with a reasonable asking price & better quality both inside & out than previously. The Outlander PHEV is still a good bet for those not quite ready to go full-on electric.”

The new Mitsubishi Outlander PHEV is available from £36,755 OTR.