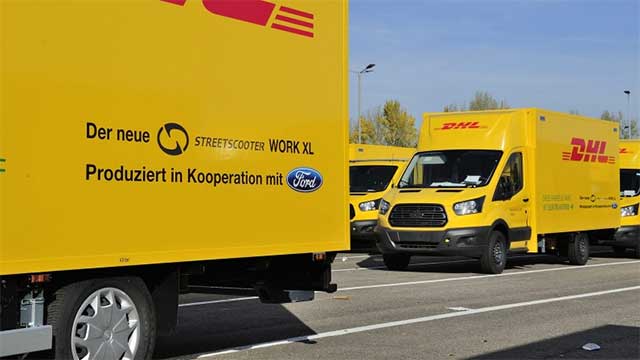 Large series production had already been approved for Street Scooter’s new WORK XL model, which went into serial production in October and is being built in cooperation with vehicle manufacturer Ford at its factory in Cologne (Germany).

The recently granted approval brings the Aachen-based electric vehicle producer and subsidiary of Deutsche Post DHL Group a vital step further in being able to meet growing domestic and international demand in an efficient and effective way.

In Germany, EC type approval for large series production is granted to vehicle manufacturers by the KBA to certify compliance with strict production standards, including in serial production involving many thousands of vehicles.

“The level of interest shown in the Street Scooter by companies with large fleets, tradespeople and municipal corporations is huge. Approval for large series production means that when filling fleet orders, large numbers of vehicles can be put on the road without problems, including abroad,” enthuses Achim Kampker, CEO of Street Scooter GmbH. “Given our growing production quantities, this is a truly vital step.”

In addition to its existing production site in Aachen, Street Scooter opened a second manufacturing facility in Düren at the end of May 2018. This increased the company’s production capacity to up to 20,000 electric vans per year.

The approval for large series production also applies to other European Union (EU) countries and to Switzerland and Norway. It greatly simplifies registration of Street Scooter vehicles in non-EU states as well. “We receive lots of inquiries and concrete orders from abroad,” says Mr. Kampker. “We can now meet that demand with greater efficiency and effectiveness, especially where large orders are concerned.”

Street Scooter already has vehicles out on the streets in various EU states. UK milk supplier Milk & More purchased 200 Street Scooters back in May. DHL uses Street Scooters for deliveries in Austria and the Netherlands.