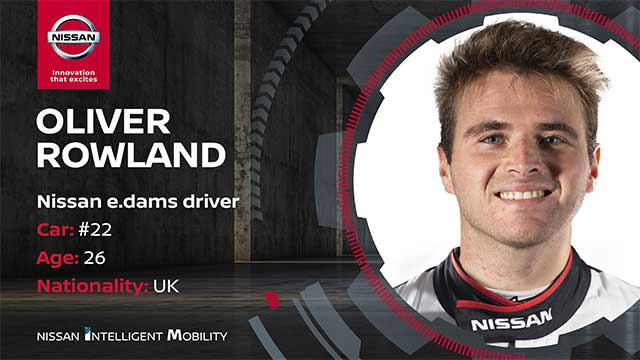 After newcomer team Nissan e.dams announced it would be parting ways with rookie driver Alex Albon earlier this week, the Japanese team has drafted in British driver Oliver Rowland to partner Sebastien Buemi for its debut season.

Filling in for Albon on the final day of pre-season testing in Valencia, Rowland set a best time of 1:20.416s around the Circuit Ricardo Tormo, albeit in wet conditions.

No stranger to the ABB FIA Formula E Championship, Rowland comes to the team after a brief outing with Mahindra Racing in Punta del Este (2015/16 season), when he temporarily stood in for Nick Heidfeld, finishing 13th in the race.

“The Formula E championship features some of the best drivers in the world,” said Rowland.

“It’s an honour to be selected by Nissan e.dams to represent them in season five.”

“To be able to work alongside Sebastien is also an incredible opportunity. I’m looking forward to challenging myself against the best of the best in Formula E.”

The British driver has raced at the 24 Hours of Le Mans with CEFC TRSM Racing, in the Blancpain GT Series Endurance Cup with Strakka Racing and in Formula 2 with DAMS.

Rowland will make his race debut with the team on the starting grid of the 2018 SAUDIA Ad Diriyha E-Prix in Saudi Arabia on December 15.