Nissan switches on largest collective solar roof in the Netherlands 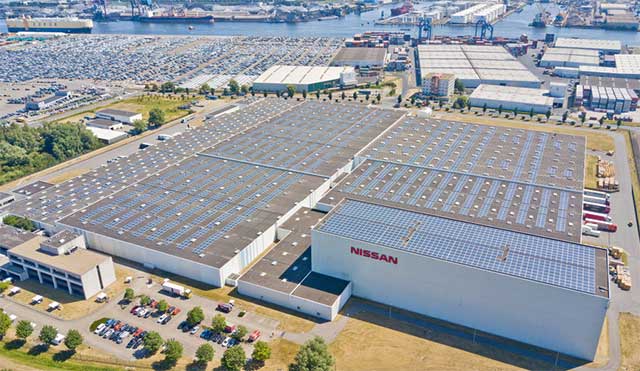 Nissan has confirmed on Tuesday the switch-on of the largest collective solar roof in the Netherlands at its facility in Amsterdam.

Installed on the roof of Nissan Motor Parts Center (NMPC) located in the country’s capital, the solar roof consists of almost 9,000 photo-voltaic panels and produces enough renewable electricity annually to power up to 900 households. It will also significantly reduce the facility’s CO2 output and in total, it is estimated that the solar roof will save 1.17 million kilograms of CO2 per annum.

With the ability to produce almost 70% of NMPC’s annual energy, the installation of this immense solar roof represents a significant milestone as Nissan strives to make its operations more sustainable across Europe. Additionally, energy generated by some of the panels will be fed directly in to the country’s national grid.

Francisco Carranza, Managing Director, Nissan Energy said: “Nissan is committed to reducing the environmental impact of our facilities across Europe and we are delighted that we can today confirm the switch-on of the solar roof at our parts centre in Amsterdam.

“Investing in and integrating new energy solutions is a cornerstone of Nissan Intelligent Mobility and this project is a clear demonstration that we not only strive to transform the way you drive, but also the way you live.”

The project is the result of the first major collaboration between residents and a company, with part of the project financed through a national crowdfunding scheme.

Koen Maes, Managing Director, Nissan Benelux: “Amsterdam is one of the most forward-thinking cities in Europe and we’re excited to be able to help the city make clever and efficient use of space, energy and resources while making our own operations much more sustainable.”

Following the success of this project, NMPC is now considering the next phase of projects to further reduce the facility’s environmental footprint.

Dec 25, 2018Blagojce Krivevski
Renault and JMCG partner on electric vehicles in ChinaVolkswagen to take over telematics specialist WirelessCar from Volvo