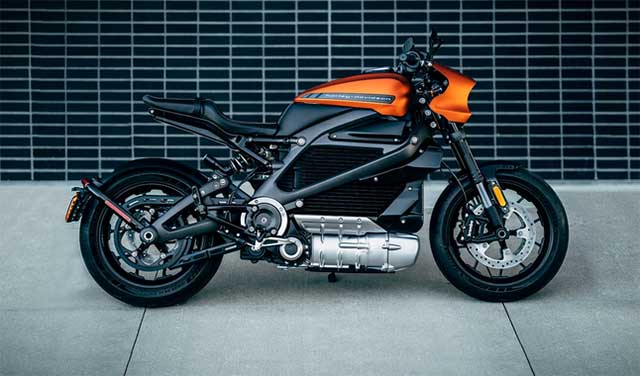 The all-new electric Harley-Davidson LiveWire made its European debut at the Milan press conference of the EICMA show. Harley-Davidson also revealed eagerly-awaited specification and details about LiveWire, which was unveiled in Milwaukee during the company’s 115th Anniversary this past Labor Day weekend.

Due for release in 2019 and being shown at the event as a production-ready motorcycle, LiveWire was first confirmed during the announcement of the company’s “More Roads to Harley-Davidson.” On July 30, 2018, Harley-Davidson shared plans to accelerate its strategy to build the next generation of riders globally. Leveraging core strengths in the business, brand and dealer network, the company intends to invest in opportunities that inspire increased ridership sooner and deliver sustainable growth for the future.

The vision behind the production LiveWire motorcycle began with Project LiveWire, revealed as a prototype in 2014 as an effort to gauge the potential of an electric-powered motorcycle as envisioned by Harley-Davidson. Drawing from the experiences of the Project LiveWire demo tour and following an intensive development program the Harley-Davidson LiveWire model offers the rider a new, high-performance motorcycling experience. Propelled by the immediate torque of an all-electric motor, the LiveWire motorcycle is capable of astounding acceleration with just a twist of the throttle – no clutching or gear shifting required. A low center of gravity, rigid aluminum frame and premium adjustable suspension components give the LiveWire dynamic handling. Performance and range are optimized for the urban street-rider.

Power
The LiveWire motorcycle is powered by a permanent magnet electric motor that produces instant torque the moment that throttle is twisted– which results in incredible acceleration performance for a thrilling ride. The motor is located low in the motorcycle to lower the center of gravity and help the motorcycle handle well at all speeds and easy to control when stopped. The LiveWire model is designed to produce a tone that increases in pitch and volume with speed –a new sound that represents the smooth, electric power of the LiveWire motorcycle.

To improve the control and performance of the motorcycle further LiveWire is fitted with Brembo Monoblock front brake calipers gripping dual 300 mm-diameter discs to deliver outstanding power with a crisp feel for confident braking performance. Confidence when riding is boosted with cornering-enhanced Anti-lock Braking System (ABS) and Traction Control System (TCS) – both of which are standard features on the LiveWire model – and co-branded H-D/Michelin Scorcher tires (180mm rear/120mm front). The rider can also tailor the performance of LiveWire with seven selectable riding modes – four of which are set as standard from the factory and a further three modes that can be defined by the user.

Technology
A color touch screen TFT display (thin-film-transistor, a type of liquid-crystal display noted for high image quality and contrast) located above the handlebar offers the rider a wide range of information on a screen that’s bright and easy to read. The display unit is tilt-adjustable to afford most riders a perfect viewing angle. The TFT screen also allows the rider to access the interface for Bluetooth connectivity, navigation, music and more.

The LiveWire motorcycle features a RESS (Rechargeable Energy Storage System, or the main battery) composed of lithium-ion cells surrounded by a finned, cast-aluminum housing. The LiveWire motorcycle is also equipped with a small 12-volt lithium-ion battery that powers the lights, controls, horn and instrument display. Charging can be completed using the on-board Level 1 charger that plugs into a standard household outlet with a power cord that stores below the motorcycle seat. LiveWire can also be charged with a Level 2 or Level 3, DC Fast Charge (DCFC), through a SAE J1772 connector, (USA), or CCS2 – IEC type 2 charging connector in international markets. All Harley-Davidson dealers who sell the LiveWire motorcycle will offer a public charging station with DCFC.

Style
The LiveWire’s style is just as stunning as the performance and follows a key Harley-Davidson styling dictum: the focus is on the motor. Just as the V-Twin engine is the most eye-catching element – the crown jewel – of every previous Harley-Davidson motorcycle, the electric motor is the first-look focus of the LiveWire motorcycle. Its bright case and mechanical, muscular shape is meant to convey the power it contains. In addition, the cast-aluminum case for the RESS has been styled with functional cooling fins. The bodywork, finished utilizing advanced paint technology to give the look of anodized metal, flows from a battery cover through to a high, wasp-like contoured tail section, with a rear fender that hugs the wheel so tightly that it almost disappears from sight.

The all-new Harley-Davidson LiveWire will be on sale next year, and further details regarding pricing and pre-order process will be released in January 2019.