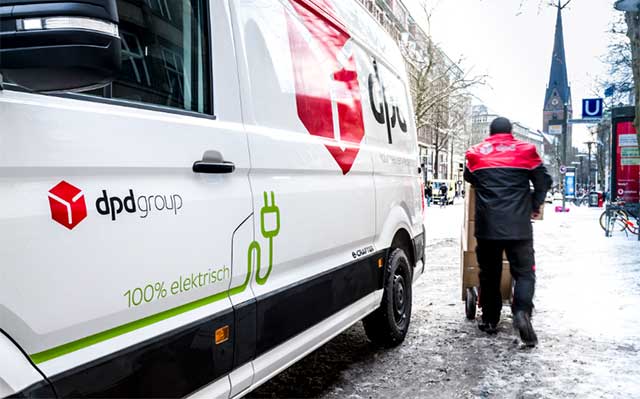 Delivery company DPD will electrify their entire fleet in Hamburg, Germany by summer of 2019, meaning they will operate with zero local emissions in inner-city districts.

DPD will incorporate a mix of electric vans and trucks and smaller light electric vehicles such as scooters and bikes.

For this purpose the DPD is applying a mixture of small vehicles such as cargo bikes and e-scooters, as well as larger vehicles such as fully electric vans and trucks. The purchase of these vehicles is partly subsidized under the scope of the ZUKUNFT.DE initiative. A number of micro depots scattered across the urban delivery areas will enable local distribution of parcels by small, electrically powered vehicles.

– VW e-Crafter: with funding from the federal government’s ZUKUNFT.DE initiative DPD is already using a number of VW e-Crafters as part of a pre-series test, with two of them operating in Hamburg. This number is now to be significantly increased. With its electric drive train and a range of up to 160 km, the VW e-Crafter is especially suitable for parcel deliveries in the inner city, where short delivery rounds covering a large number of stops are typical.

– Electrically powered cargo bikes: past experience from other cities indicates that under favourable conditions a cargo bike can almost entirely replace a conventional delivery van. Up to now three cargo bikes manufactured by Radkutsche have been in operation in Hamburg. These cargo bikes are particularly suitable for the delivery of parcels to non-business consignees, who normally only receive one or two parcels per stop.

– E-scooters: in Hamburg DPD has for the past year been testing two TRIPL scooters made by the Danish manufacturer EWII, with further vehicles of this type in operation in Berlin and Cologne. The TRIPL has a greater range than cargo bikes, and is significantly more manoeuvrable and efficient in urban areas than conventional vans. Whereas van drivers in the inner city constantly have to be on the lookout for somewhere to park, TRIPL scooters as a rule can travel right up to the consignee’s front door. This saves both time and travelling distances, and relieves the pressure on inner-city traffic.

– E-trucks: DPD is testing the use of several fully electric trucks in Hamburg for the purpose of making pickups and deliveries on behalf of large business customers. The company has built up positive experience in this respect in other countries, including the UK where DPD is using the FUSO eCanter from Daimler and Mitsubishi in London, for example.

While the larger electric vans and trucks can operate from the DPD parcel distribution center in Hamburg-Wilhelmsburg, the smaller electric vehicles are based at urban micro depots. These are small sorting and handling centres which are located directly within the urban delivery area. The parcels are delivered to the micro depots in the morning by truck or van, and then distributed within the delivery area by cargo bike or TRIPL scooter. In October of this year DPD began operations with its first micro depot in Hamburg. The TRIPL scooters are based in an underground garage in Hamburg’s Hafencity, where they are charged overnight before being loaded with parcels during the day.

Both in Hamburg and in other cities DPD is hoping for greater support from the municipalities in the establishment of alternative delivery concepts, and in particular in the search for suitable locations for micro depots.