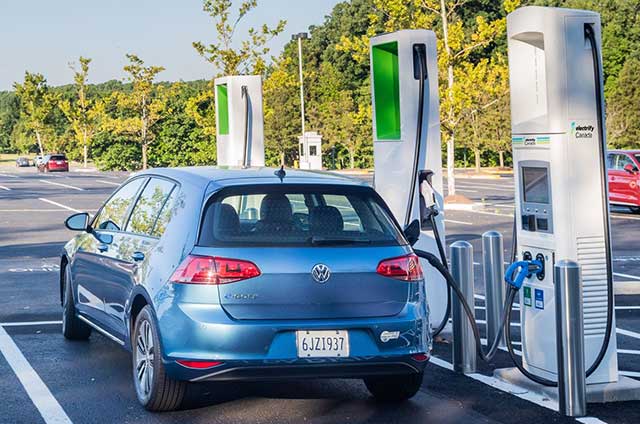 The Country Hills Shopping Plaza in Torrance, California will be the first DC fast charging station to open in the state as part of Electrify America’s plan to install approximately 160 charging stations in California by June 2019.

Target locations or “target zones” for each station were identified using Electrify America’s proprietary station siting methodology, which projected the locations where DC fast charging stations will be most needed by 2020.

“The Country Hills station in Torrance is a great first step as we start to quicken the pace of construction and make more stations available to the public,” said Brendan Jones, chief operating officer of Electrify America. “The fast chargers that we are installing have the capability to charge an EV up to 20 miles of range a minute to a vehicle. Providing this kind of range confidence can be a game-changer in accelerating ZEV adoption in the U.S.”

The planned network in California will consist of more than 600 DC fast charging dispensers at approximately 160 charging station sites. In addition, Electrify America will build approximately 1,500 charging stations featuring Level 2 chargers at workplaces and multiunit dwellings in its six metropolitan markets. The network will deploy cutting-edge technology to deliver customer-centric charging to consumers safely and conveniently, and it will connect California to the Electrify America national network connecting 42 other states.

EV owners are encouraged to check the Electrify America website to confirm when these California stations are open for charging. The locator map can be found on the company’s website or at the following link Electrify America Charging Stations Locator.

Electrify America’s nationwide DC fast charging stations will be located along high-traffic corridors in 42 states, including two cross-country routes. Locations will accommodate between four and ten chargers, with charging power levels up to 350kW available, capable of adding up to 20 miles of range per minute to a vehicle. Nationally, each planned charging station site will be located no more than 120 miles apart and, on major East and West Coast highways, planned locations average only 70 miles apart. Within California, average distance between stations is projected to be 48 miles with.