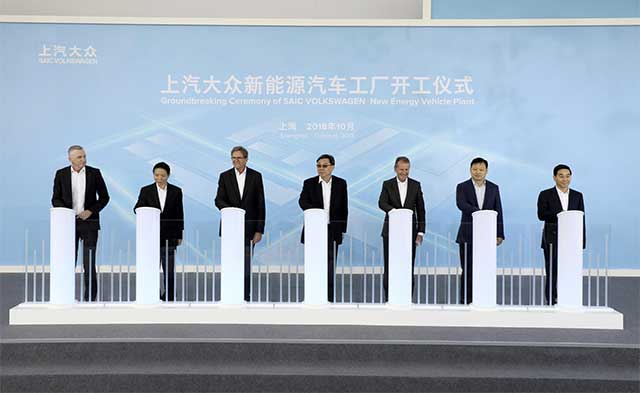 The electrification strategy of the Volkswagen Group China is rapidly gaining pace in the world’s biggest market for e-mobility. The Group’s first factory specifically designed for the MEB platform is now commencing construction in Anting.

The first model that will be produced in the factory of SAIC VOLKSWAGEN is a Volkswagen Brand SUV in 2020. Together with the FAW-Volkswagen factory in Foshan, which opened this summer, SAIC VOLKSWAGEN’s plant will begin to produce electric cars on the MEB platform directly after the first worldwide MEB-production starts in Zwickau, Germany.

“Through Volkswagen’s MEB platform, we will be able to easily produce state-of-the-art electric vehicles for our Chinese customers on a high scale. The Volkswagen Group, its brands and their Chinese joint venture partners focus consistently on sustainable mobility and push the transformation of the automotive industry in China and worldwide. In this way, we emphasize the importance of the Chinese market for the Volkswagen Group,” said Diess, Chairman of the Board of Management of Volkswagen Group.

SAIC VOLKSWAGEN’s new factory, located in Anting, Shanghai, adopts a production network based on Industry 4.0 and increases automation rates and efficiency. The facility comes equipped with over 1400 Industry 4.0 standard robots, as well as a range of technologies including AI, AR and VR, delivering an intelligent and digitalized production plant. Covering 610,000 square meters, the plant for new energy vehicles (NEV) includes a variety of different function areas such as pressing equipment and battery assembly workshops, in addition to an elevated stereoscopic warehouse, a proving road and more. Meanwhile, it utilizes 27 types of environmentally-friendly technologies with a special focus on water preservation, energy saving and the reduction of carbon dioxide.

The facility is scheduled to be put into production by 2020 with a planned annual capacity of 300,000 vehicles. It will produce various new pure electric vehicles of SAIC VOLKSWAGEN, including medium and large sized pure electric SUVs, as well as battery systems. The first vehicle being built is a MEB-SUV from the Volkswagen brand. The factory will be supporting the Volkswagen Group’s e-mobility strategy in China.

The vehicles being produced in Anting are based on the MEB, which is Volkswagen’s first pure electric automotive modular platform developed for mass production. Through this new platform, MEB vehicles will have a more dynamic design, additional space, expanded battery capacity, and all-new integrated digital services, while being fully prepared for future autonomous driving implementation.

With the so called Roadmap E, the Volkswagen Group is driving forward its ambitious electric offensive. By 2025, 50 purely electric vehicles will be on the market worldwide, with one in four new vehicles to be powered by electricity only.

China, the leading e-vehicle market, plays a central role for Roadmap E. In June, the opening of a second FAW-Volkswagen plant in Foshan marked another significant milestone for the electrification strategy in China. Owing to the plant expansion, annual production capacity in Foshan has doubled from 300,000 to 600,000 vehicles. In addition to new SUV models from Volkswagen and Audi, the vehicles currently manufactured on the MQB platform are gradually being electrified. Moreover: by 2020, production of MEB-vehicles as well as MEB battery systems is set to commence here. In late May, production of Volkswagen models at the FAW-Volkswagen plant in Qingdao commenced. This flexible manufacturing facility allows for models with internal combustion engines as well as electric drive systems to be built on the same production line. FAW-Volkswagen will also produce battery systems for the MQB platform there.