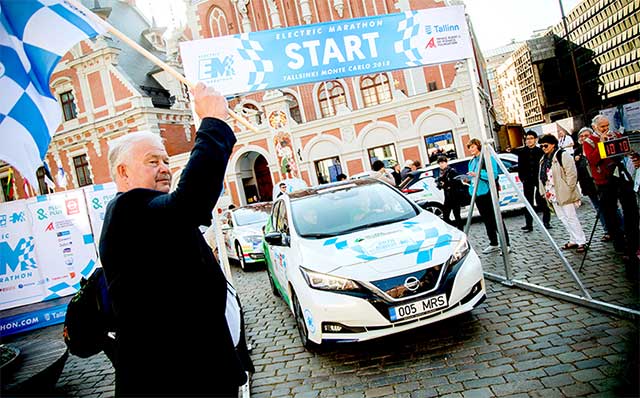 Nissan is partnering with the Electric Marathon by providing a 100% electric Nissan LEAF to each of the six university teams rallying from Tallinn, Estonia, to Monte Carlo.

In the 2018 edition, the Nissan LEAF is the only mass-market electric vehicle to compete in its own category. The format of the marathon has changed compared to the last few years.

“This year, competitions are held in two categories – between universities from six different countries which all use identical new Nissan LEAF 40 kWh, and in the so-called ‘open’ class with an unlimited number of different types of electric vehicles,” said Jüri Tamm, Honorary Consul of the Principality of Monaco and head of the organizing committee. “All EV drivers are welcome to participate. It is possible to participate in the entire marathon, or in each stage separately, and the winners will be awarded with diplomas and medals. The purpose of the marathon is to support environment-friendly transport. The celebratory finish and award ceremony will be held at the square in front of the Prince’s Palace in Monaco on September 29.”

Patronized by Prince Albert II of Monaco, the Electric Marathon 2018 kicked off in Tallinn in front of the Estonian National Opera. The program paid tribute to the historic rally from the 30s and all Estonian electric car owners were welcome to participate at the Tallinn-Pärnu stage. Around 40 electric vehicles lined up at the starting lineup.

“The new LEAF is our icon of Nissan Intelligent Mobility and an important step towards Nissan’s vision to deliver sustainable mobility for all,” said Gareth Dunsmore, Electric Vehicle Director, Nissan Europe. “Seeing our 100% electric Nissan LEAF starting such a marathon is a true testament of how versatile this car can be.”

New additions to the competition include the prologue in Helsinki and the stage in Kaliningrad, and the interim finish of the competition also has an important role in the program of the Hamburg Climate Week.

“We are planning to make interim finishes by the European Court of Auditors in Luxembourg and visit various universities in Poland and France,” said Tamm. “In cooperation with the Baltic Sea Philharmonic Orchestra and the 25th anniversary festival of the Usedom Music Festival, a culture-friendly interim finish of the electric marathon rally will be held in Peenemünde in front of the Historical Technical Museum.”