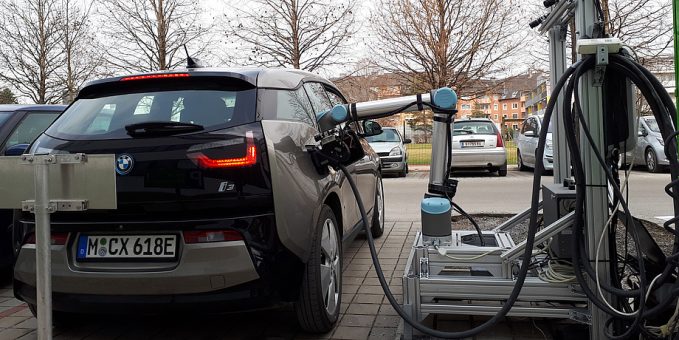 Researchers from TU Graz’s Institute of Automotive Engineering and their industry partners have unveiled a world first: the prototype of a robot-controlled, high-speed combined charging system (CCS) for electric cars that enables series charging of cars in various parking positions.

Global demand for electric vehicles is forecast to rise sharply: by 2025, the number of new vehicle registrations is expected to reach 25 million per year. This will require new technical solutions for charging infrastructure: EV charging should take place as quickly as possible and, as far as possible, without the driver’s involvement.

Researchers at TU Graz have now developed an automated, conductive – in other words, cable-based – robotic system that for the first time allows for charging of different vehicles entering the charging space one after the other. The comfort charging system is designed for use with standard charging plugs (CCS), meaning that no specific vehicle adaptations are necessary. The project partners were BMW AG, headquartered in Munich; MAGNA Steyr Engineering Graz; Linz-based automation specialists KEBA and the Austrian Society of Automotive Engineers (ÖVK) in Vienna.

Bernhard Walzel, who oversees this research focus at TU Graz as part of his dissertation, explains the revolutionary methodology: “For the first time we have found a way to automatically recharge several vehicles, one after another, using a robotic charging station, without the need to adapt the vehicles. The robot recognises the charging socket by means of sophisticated camera technology and can charge several e-cars in sequence after they drive into the charging station. Problems associated with the vehicle’s parking positioning on the station were solved, so the system still works even when a vehicle is not parked in an exact position.” As Walzel points out, another unique feature is that the robot can operate in various light conditions indoors as well as outdoors.

A major challenge facing the researchers was programming and integrating sensor technology to identify the exact position and type of vehicle and charging socket. Working in close collaboration with the Institute of Computer Graphics and Vision at TU Graz, the robotic charging system was fitted with several cameras. These recognise the position and type of the charging socket and inform the robot where to plug in the charging cable. The aim was to design the sensors and charging robot in such a way that it was suited to use with various vehicle types and parking positions, without the need for any changes to the vehicle itself. This means the system can operate with all standard charging plugs. In order to solve the problem, the researchers devised a complex mechatronic system consisting of sensors, robot kinematics and robot control elements.

The technology developed in Graz is designed for automated high-capacity charging of e-vehicles, supplying them with sufficient power to cover long distances; charging lasts only a few minutes. Such high-capacity charging requires innovative liquid-cooled plugs and cables, which can be easily connected to the vehicle using the robot-controlled rapid charging system. The technology also provides a solution that could be implemented for fully automated parking and charging of electric vehicles in future.