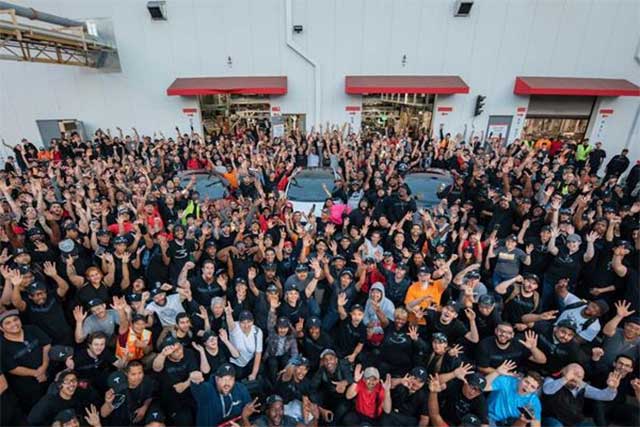 For the first time, Model 3 production (28,578) exceeded combined Model S and Model X production (24,761), and Tesla produced almost three times the amount of Model 3s than they did in Q1. Tesla’s Model 3 weekly production rate also more than doubled during the quarter, according to the Palo Alto-based carmaker without compromising quality.

GA4, Tesla’s new General Assembly line for Model 3, was responsible for roughly 20% of Model 3s produced last week, with quality from that line being as good as the regular GA3 line. Tesla expects that GA3 alone can reach a production rate of 5,000 Model 3s per week soon, but GA4 helped to get them there faster and will also help to exceed that rate.

Tesla expects to increase production to 6,000 Model 3s per week by late next month. Tesla also reaffirms its guidance for positive GAAP net income and cash flow in Q3 and Q4, despite negative pressures from a weaker USD and likely higher tariffs for vehicles imported into China as well as components procured from China.

Q2 deliveries totaled 40,740 vehicles, of which 18,440 were Model 3, 10,930 were Model S, and 11,370 were Model X. Model S and X deliveries are in line with the guidance provided on May 3. As previously noted, Tesla in the process of changing the quarterly production pattern of those vehicles for the various worldwide regions to ensure a more linear flow of deliveries through the quarter. Both orders and deliveries for Model S and X were higher in Q2 than a year ago. Tesla’s overall target for 100,000 Model S and Model X deliveries in 2018 is unchanged.

11,166 Model 3 vehicles and 3,892 Model S and X vehicles were in transit to customers at the end of Q2, and will be delivered in early Q3. The high number of customer vehicles in transit for Model 3 was primarily due to a significant increase in production towards the end of the quarter.

The remaining net Model 3 reservations count at the end of Q2 still stood at roughly 420,000 even though Tesla has now delivered 28,386 Model 3 vehicles to date.