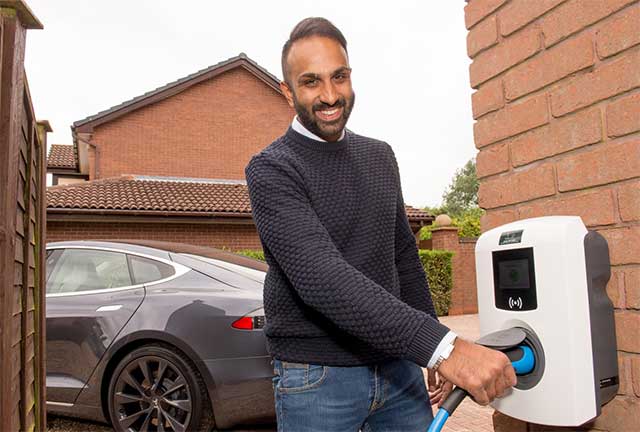 The Electric Nation project has installed its final smart charger as part of its trial with electric vehicle (EV) owners. The project will now be assessing the smart charging technology and feedback from trial participants.

This milestone for the Electric Nation project was reached at the same time that the UK Government published its ‘Road to Zero’ strategy, which lays out a roadmap for increased EV adoption. Plans for higher and faster levels of EV uptake are likely to lead to challenges with the capacity of local electricity networks at peak electricity demand times – smart charging can provide a solution to this problem.

Smart charging is also due to be mandated in the government’s ‘Automated and Electric Vehicles Bill’ which has now passed through Parliament. This could enable a wide range of services that could reduce the overall cost of charging for EV drivers who predominantly charge at home and also enable local network protection at the same time.

One of the final smart charger installs was for Sunny Vara, who had a charger fitted to coincide with taking delivery of a new Tesla. Sunny was very positive about the Electric Nation project, commenting: “The entire process from applying to be part of the trial to having the smart charger installed was seamless, and it’s now extremely easy to charge my car at home. I’m looking forward to finding out what we can learn from the data generated by the project, as well as discovering the cost savings from running an electric car compared with having to visit a fuel station to fill up with petrol.”

The final smart charger installation is the climax of more than two years of hard work for the Electric Nation team, in particular DriveElectric, the partner that has been leading the recruitment for the trial since late 2016.

Mike Potter, Managing Director of DriveElectric, adds: “The high level of interest that we’ve received from EV drivers to be participants in Electric Nation has reinforced the view that we’re now at a tipping point with EVs. In the next two years we’re likely to see a significant rise in the numbers of EVs on our roads, so it’s all the more important that our Electric Nation participants are engaging with us so enthusiastically to trial smart charging in advance of an expected roll-out of such technology nationwide. I’d also like to thank the team here at DriveElectric for all their excellent work engaging with participants, which includes dealing with over 3,000 enquiries for 700 spaces on the trial.”

Electric Nation’s initial findings show that on average, vehicles are plugged in for 12 hours, but they are rarely charging for the full time. This suggests that there is likely to be sufficient flexibility to manage charging away from peak electricity demand periods. This will be explored in more detail as the trial continues during the remainder of 2018.

The Electric Nation trial is taking place in the WPD network areas in the Midlands, South West and South Wales.