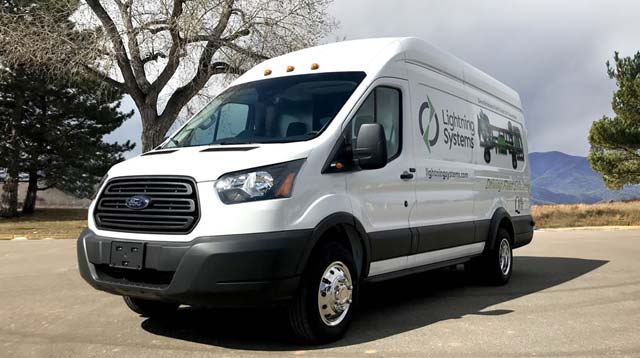 Lightning Systems, a global developer of zero-emissions solutions for commercial fleets, is taking its new Ford Transit LightningElectric model on the road, showcasing the recently released vehicle efficiency ratings of 61 MPGe on in-town routes and 66 MPGe on highway.

The LightningElectric is a battery-electric drivetrain package for the heavy-duty Ford Transit, a product used extensively by commercial and government fleets. Lightning was one of the first to test under the newly released 2018 CARB efficiency and range validation test procedures for medium-duty vehicles, performed at the SGS Environmental Testing Center.

The all-electric Lightning product features a state-of-the-art, liquid-cooled Lithium-Ion battery from a volume-ready world-class battery supplier that can be fast-charged in 30 minutes on DC fast charging and in six hours with Level 2 charging. Depending on battery option and drive cycle, LightningElectric has a payload capacity of up to 4,000 pounds.

Last month, Lightning Systems announced that it has developed a hydrogen fuel cell version of the LightningElectric developed in partnership with several industry partners that will extend the range of the vehicle to over 200 miles. The fuel cell uses hydrogen to charge the electric batteries for a longer-range zero-emissions fleet solution. This product will be available in summer 2018 with a focus on the California market where significant vouchers for fuel cell vehicles and infrastructure are available.

LightningAnalytics, a new cloud-based analytics system that provides drive, route and predictive vehicle health scoring for maximum range and efficiency, is available as an option with every Lightning Systems vehicle. The analytics system provides fleets with real-time information to operate their fleet at peak efficiency.

LightningElectric is available for the Ford Transit as part of Ford’s eQVM program. The product, which went on sale earlier this year, is available for heavy-duty Ford Transits with a 10,360-pound gross vehicle weight rating (GVWR). Ford’s vehicle warranty covers the base chassis for vehicles with the Lightning drivetrain. Ford QVM dealers and upfitters perform installations and service.

The road trips started at Lightning Systems’ headquarters in Loveland, Colorado. One will go westbound to California and throughout that state (Sacramento, San Francisco, Fresno, San Diego, Los Angeles, Long Beach), while the other will travel eastbound through Detroit to New York (Kansas City, Detroit, Albany, New York City). The westbound tour will end at the Advanced Clean Transportation (ACT) Expo in Long Beach, California, while the eastbound tour culminates at the 30th Annual Equipment & Vehicle Show in Queens, New York.

At the end of the eastbound and westbound tours, Lightning Systems will make deliveries of the LightningElectric to Halo Event Group, a FedEx Ground contractor in New York City, and to XPO Bus Sales in Los Angeles.