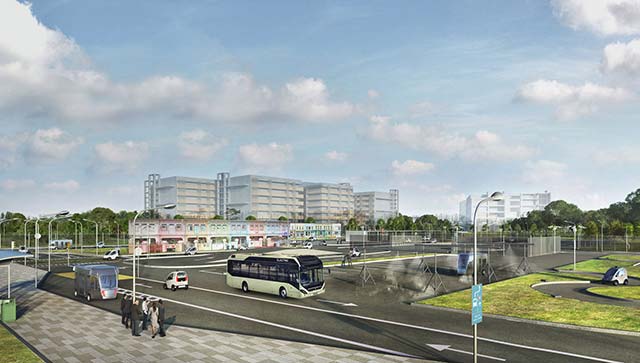 For Volvo, this will be its first autonomous application in public transportation anywhere in the world and it has chosen NTU Singapore as its partner in this endeavour. Volvo has already demonstrated its autonomous drive technology in mining, quarry and refuse collection operations.

The 12-metre Volvo 7900 Electric bus is already in service around the world, providing a quiet and emission-free operation, and requiring 80 per cent less energy than an equivalent sized diesel bus.

The 40-seater buses to be deployed in Singapore will be equipped with autonomous driving technologies. These include GPS and LIDAR laser technology systems for charting, positioning and detecting obstacles around the vehicle, and an integrated navigation system that includes automated steering, gear changing, and speed throttling technologies.

The NTU and Volvo partnership is also part of the collaboration between NTU and the Land Transport Authority (LTA) under the university’s living lab platform announced in October 2016. The living lab platform assesses technology maturity and road-worthiness, including the certification of the technologies for deployment on public roads.

The NTU-Volvo programme will be supported by SMRT and ABB, which will be assessing the vehicles’ roadworthiness and charging systems.

The autonomous electric buses will be tested on campus at CETRAN, which replicates different elements of Singapore’s roads, with common traffic schemes, road infrastructure, and traffic rules.

Singapore’s public transport operator SMRT will also play a critical role in determining the roadworthiness of autonomous vehicles and assist in operational trials.

One of the buses will undergo tests at a local bus depot managed by SMRT. This would test the vehicle’s capabilities to autonomously navigate into vehicle washing bays and park safely at charging areas.

For the development and deployment of fast-charging stations based on the OppCharge interface, Volvo and NTU will be partnering ABB, a global leader in charging solutions for electric vehicles.

The charging station is capable of providing 300kW of charging power in three to six minutes, during the layover times at the bus route’s end points.

Volvo Buses is one of the world’s leading manufacturers of electrified buses and has sold more than 3,800 hybrid buses, electric hybrid buses and all-electric buses.