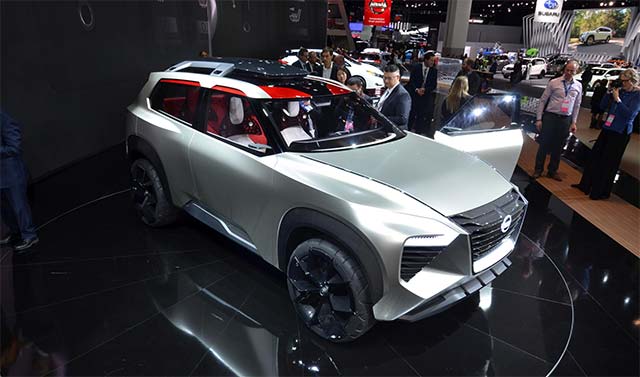 The Nissan Xmotion concept garnered the “Innovative Use of Color, Graphics or Materials” award at the 2018 North American International Auto Show. The award was one of several bestowed by the prestigious collective of automotive designers known as EyesOn Design.

The Xmotion concept, a preview of the next generation of Nissan compact SUVs, made its world debut yesterday during a media event at the auto show. It is the second consecutive time Nissan has won this award, following last year’s Vmotion 2.0 concept, which also was named as “Best Concept Vehicle.”

“The Xmotion concept is a study in how seemingly disparate elements can gain power and strength through coexistence,” said Alfonso Albaisa, senior vice president of global design at Nissan Motor Co., Ltd. “It draws inspiration from the Japanese aesthetics and techniques that have been passed down through generation after generation. At the same time, it achieves the modern purposefulness required for drivers in the near-future era of connected, autonomous crossover vehicles.”

Throughout the Xmotion concept’s exterior and interior, the designers turned to traditional construction techniques, craftsmanship and materials but applied them with a modern design aesthetic. For example, the Xmotion concept’s center console uses one of the many traditional Japanese architectural wood joinery techniques, kanawa tsugi. Found in the carpentry used to build religious temples and shrines, the technique doesn’t use a single nail or glue and is known for its strength and durability.

Similarly, the instrument panel design is a modern interpretation of the traditional Kigumi wood joinery. By using the Kigumi structure in the instrument panel and console, the Xmotion concept interior suggests a robust bone structure, creating a sense of strength and trust that passengers want to feel in their vehicle.

The use of color was carefully considered in an effort to bring together tradition and modernity. Two colors were selected for use on the exterior. A special shade of silver was created to resemble pewter, a very solid yet malleable metal traditionally used in Japan for fine, detailed handicraft work. The color showcases the various body shapes and contours, as well as resonating very well with the colors and materials used inside the Xmotion concept.

The Xmotion concept’s interior palette includes colors representing Japan – red and white – as well as touches of black to symbolize modern technology. The interior colors transition gradually from white and gray in front – with some black accents to showcase the technology elements – to red in the rear areas. Nishijin-weave carbon-fiber accents are used inside as well. The interior coloring was inspired by the notion of utsuroi, or “gradual transitions” – with the traditional red blending into the advanced future. White is purity, cleanliness and simplicity, while the scarlet red adds a brightness, strength and energy to the space.

The annual EyesOn Design Awards, given in seven categories, are selected by more than 30 active and retired design heads of automotive manufacturers and transportation design chairs from top art schools. According to the group’s website, the awards are “considered the validation of great automobile design from the industry’s leaders.”