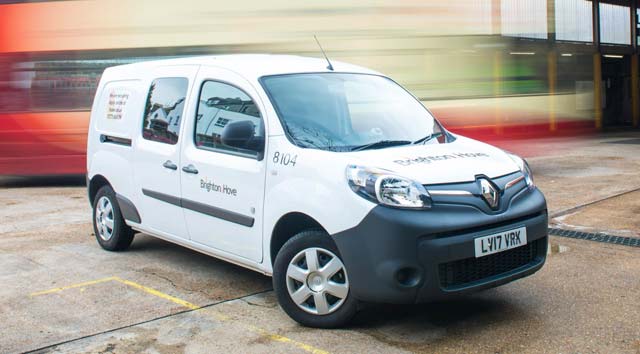 Brighton & Hove Buses, part of the Go Ahead Group, one of the leading nationwide providers in passenger transport, has added six 100% electric Renault Kangoo Z.E. Vans to their fleet to support the workshop. They know a thing or two when it comes to selecting the right vehicles, after all, over a billion journeys are made on their buses and trains every year.

Brighton & Hove Buses are committed to acting sustainably and were key in helping owning group Go-Ahead become the first transport company to achieve the Carbon Trust Standard for reducing year-on-year emissions in carbon, water and waste. This is why the all-electric Renault Kangoo Van Z.E. was their logical choice. With more than adequate range for the job in hand and zero emissions rating the Renault Kangoo Van Z.E. made sense financially, in terms of running costs, but also in terms of overhead costs.

Steve Ambury, Engineering Director of Brighton & Hove Buses commented: “As a forward thinking transport provider we needed a van that not only worked for us financially but one that is moving the game forward. The Renault Kangoo Van Z.E. perfectly suits our requirements whilst reducing the companies’ tax liabilities and carbon footprint.

The Kangoo Z.E. has recently been enhanced with the addition of the 33kWh battery pack. Now with almost 60% more range, now achieving 170 miles (NEDC). In real-world driving, Renault estimates the Kangoo fitted with the new Z.E. 33 battery has a real-world range of around 124 miles.

The New Kangoo Van Z.E. 33 is available in four variations:

Renault’s Pro+ brand offers vehicles to suit businesses of all sizes supported by a network of specialised dealerships. These outlets meet commitments including specialised sales and aftersales advisors for commercial vehicles. Commercial vehicle test drives are available without an appointment, and quotations are given within 48 hours, including for converted vehicles. A diagnosis is guaranteed within the hour and a van, or van-replacement vehicle, are supplied if necessary to keep businesses on the move.

Renault is Europe’s leading electric vehicle manufacturer — for both cars and vans — and offers a line-up of electric vehicles including the multiple award-winning ZOE supermini, with its enhanced 250-mile NEDC range, the Twizy urban quadricycle and the Kangoo Van Z.E. The Master Z.E. – an all-electric version of Renault’s large panel van – will join the line-up in 2018.