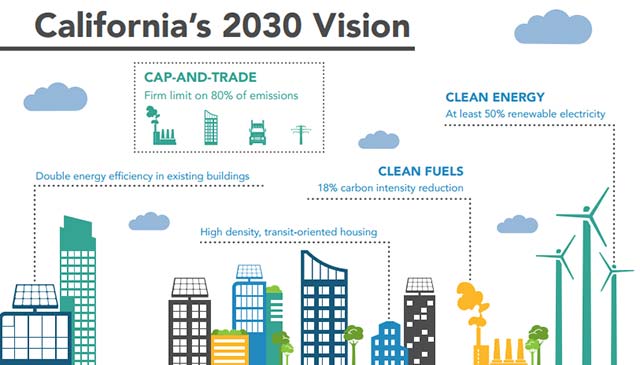 Building on the state’s success in decarbonizing its economy, the California Air Resources Board this week approved a bold plan to accelerate the reduction of greenhouse gas emissions over the coming decade while improving air quality and public health, investing in disadvantaged communities, and supporting jobs and economic growth.

Eleven years ago, the landmark Global Warming Solutions Act (AB 32) set the goal of reducing greenhouse gas emissions to 1990 levels by 2020. California is on track to exceed that target, while the state’s economic growth has continued to outpace the rest of the country.

The 2017 Climate Change Scoping Plan, approved unanimously by CARB, sets the state on an ambitious course to reduce climate-changing gases an additional 40 percent below 1990 levels by 2030 under SB 32. This will require California to double the rate at which it has been cutting climate-changing gases.

Following through on these actions, the plan estimates, could save the state in 2030 as much as $11 billion dollars in avoided environmental damage from carbon pollution in 2030. Costs of California’s 2017 wildfire season so far are now more than $10 billion.

Even though the state boasts the second largest plug-in market in the world after China with more than 300,000 fully electric and plug-in hybrid vehicles on the road, transportation sector emissions are the California’s largest source of emissions and passenger vehicle tailpipes emit 27% of statewide emissions.  Electrification is key to driving these emissions down, and the state has aggressive electric vehicle targets, aiming to have 1.5 million plug-ins on the road by 2025 and more than 4.2 million deployed by 2030.

The programs detailed in the Scoping Plan will also improve public health while reducing costs associated with healthcare and natural disasters. These include a projected reduction in premature deaths of 3,300 by 2030. The financial benefit from reduced sick days and hospital stays will be more than $1.2 billion in 2030.

Implementing this Scoping Plan will ensure that California’s climate actions continue to promote innovation, drive the generation of new jobs, and achieve continued reductions of smog and air toxics. The ambitious approach draws on a decade of successful programs that address the major sources of climate-changing gases in every sector of the economy:

– More Clean Cars and Trucks: The plan sets out far-reaching programs to incentivize the sale of millions of zero-emission vehicles, drive the deployment of zero-emission trucks, and shift to a cleaner system of handling freight statewide.

– Increased Renewable Energy: California’s electric utilities are ahead of schedule meeting the requirement that 33 percent of electricity come from renewable sources by 2020. The Scoping Plan guides utilities to 50 percent renewables, as required under SB 350.

– Slashing Super-Pollutants: The plan calls for a significant cut in super-pollutants such as methane and HFC refrigerants, which are responsible for as much as 40 percent of global warming.

– Cleaner Industry and Electricity: California’s renewed cap-and-trade program extends the declining cap on emissions from utilities and industries and the carbon allowance auctions. The auctions will continue to fund investments in clean energy and efficiency, particularly in disadvantaged communities.

– Improved Agriculture and Forests: The Scoping Plan also outlines innovative programs to account for and reduce emissions from agriculture, as well as forests and other natural lands.

The Scoping Plan is the result of unprecedented public outreach and coordination over the past two years. More than 20 state agencies collaborated to produce the plan, which was informed by 15 state agency-sponsored workshops, five board meetings and more than 500 public comments. 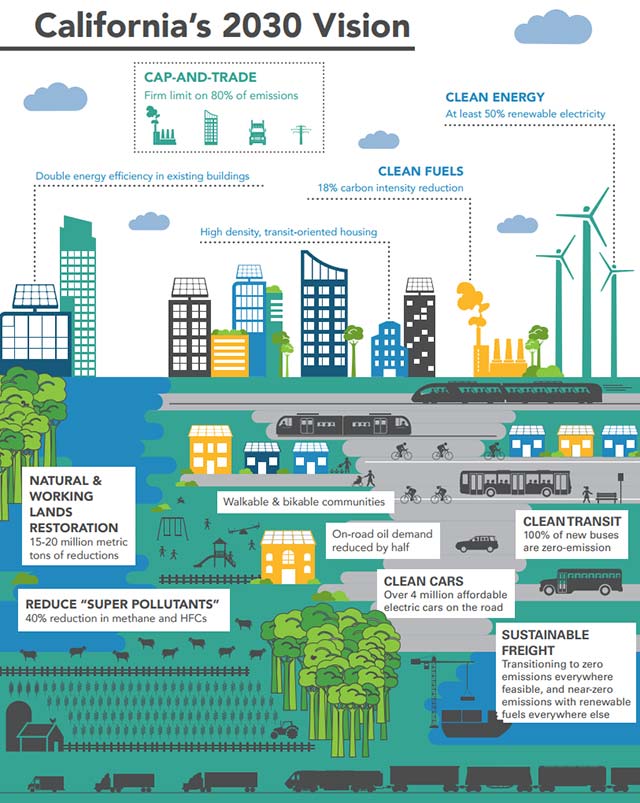