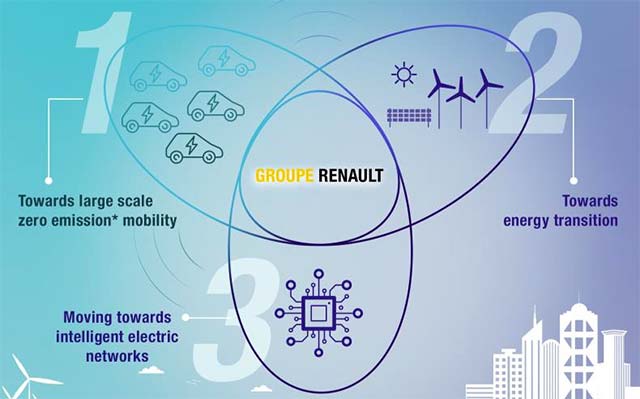 Renault, Europe’s number one manufacturer of electric vehicles, has created a new subsidiary brand called Renault Energy Services that will focus on energy and smart-grid sectors, both of which are fundamental to the expansion of electric mobility.

Gilles Normand, SVP, Electric Vehicles, Renault said: “The creation of Renault Energy Services marks an important step forward. Investing in smart grids is key to both reinforcing the lead we enjoy in the European electric vehicle market and accelerating the EV industry’s scale-up.”

Thanks to its new subsidiary, Renault intends to make a real contribution to the expansion of smart charging networks which, by facilitating the communication of data, are capable of making real-time adjustments to the supply of electricity for more-efficient management of resources. Renault electric vehicles connected to smart grids will benefit from more economical, lower-carbon electricity.

In addition to permitting the development of smart charging, smart grids favour both interaction between electric vehicles and networks (vehicle to grid) and projects involving second-life batteries:

– Smart charging adjusts battery charging rates as a function of customers’ needs and the availability of electricity via the grid. Batteries are charged when supply exceeds demand, notably during renewable energy production peaks and when rates are at their cheapest

– In vehicle to grid systems, electric vehicles provide electricity to the grid during peak hours. In this way, not only do they benefit from the advantages of smart charging but they also serve as a means to temporarily store energy

– Even once their life as a power source for electric vehicles is over, EV batteries continue to be capable of storing a significant amount of energy. Renault is able to harness this energy, notably for the purposes of stationary energy storage. By giving batteries a second lease of life, Renault is today in a position where it can cover the full spectrum of energy storage needs, from individual homes to office buildings, factories, schools and apartment blocks, and even the charging of electric vehicles

Renault’s push for electric has also been bolstered with the newly revealed Drive the Future plan. The plan includes the launching of eight fully electric and 12 electrified models by 2022. The plans reflect the vision laid out last month by the Renault Nissan Mitsubishi alliance, the world’s No. 1 carmaker by sales.