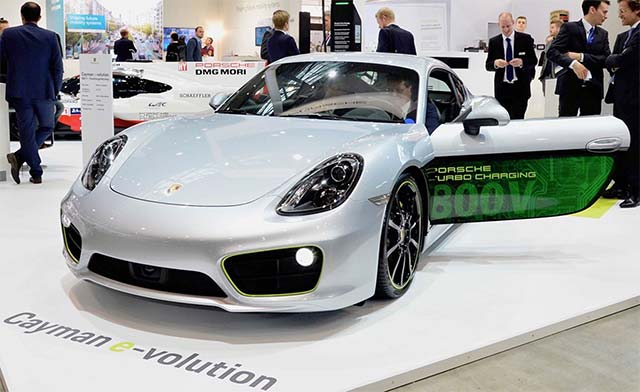 Porsche unveiled the Cayman e-volution concept at the 2017 Electric Vehicle Symposium in the company’s hometown of Stuttgart.

The all-electric Cayman e-volution will not go into series production, rather it ‘hints at what is to come in 2019,’ when the marque’s first purely electric production car – the Mission E – will be launched.

Fast forward to 2019 and the Mission E will be capable of covering a range of over 310 miles (500 km) while charging its batteries to 80 percent will take just 15minutes.

Porsche also used the Electric Vehicle Symposium to show off what it calls Porsche Turbo Charging. Achieving a charging capacity of up to 320 kW per vehicle, more than twice that of Tesla’s Supercharger system, Porsche Turbo Charging is a co-development between Porsche Engineering and ADS-TEC.

The Turbo Charging the system will be part of a Europe-wide charger network, which Porsche – alongside partners Audi, BMW, Daimler and Ford – will roll out across major European traffic routes by 2020.