ABB to supply HESS with flash-charging tech for electric buses 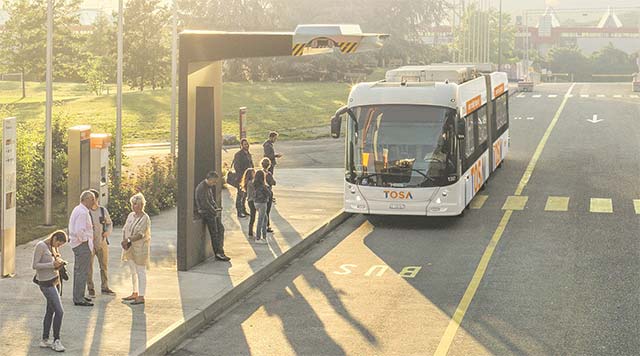 ABB has won a $20 million order from Swiss bus manufacturer HESS to supply its flash-charging technology for 20 electric buses and related infrastructure for the French city of Nantes. The buses will be operated by public transport operator, Société d’Economie Mixte des Transports de l’Agglomération Nantaise (Semitan).

Batteries mounted on the roofs of the Nantes buses will be charged in 20 seconds with a 600-kilowatt boost of power at selected stops while passengers are embarking and disembarking. It takes less than one second to connect the bus to the charging point, making it the world’s fastest flash-charging connection technology. A further 1 to 5 minutes charge at the terminus at the end of the line enables a full recharge of the batteries.

The fleet will run on the Busway Bus Rapid Transit (Line 4) route connecting the historic center of Nantes with municipalities on the southern side of the river Loire. The new bus system will increase passenger capacity by 35 percent enabling sustainable transport for about 2,500 commuters every hour. Since the route’s inauguration in 2006, passenger numbers have increased, leading to overcrowded buses. The 24 meter long, fully electric buses from HESS will be the first of their kind in the world to be equipped with the flash-charging technology, enabling a higher passenger capacity, emission-free public transport and noise reduction. The buses are expected to be operational by the end of 2018.