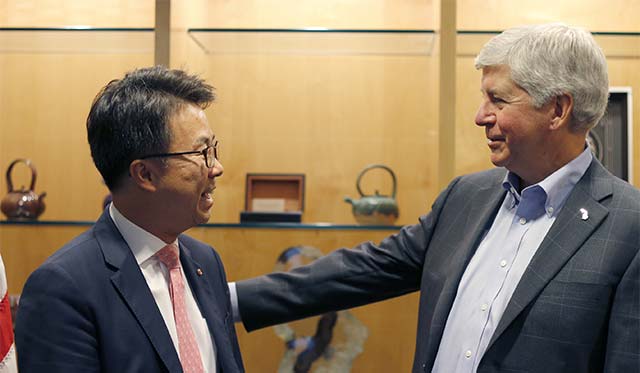 The project will mean at least 292 new Michigan jobs, including factory workers in Hazel Park and engineers at the expanded LG R&D Center in Troy, Mich.

Representing an LG investment of about $25 million, the project is supported by a $2.9 million capital grant under the Michigan Business Development Program over the next four years, as announced today by the Michigan Economic Development Corporation. LG also will receive hiring and training assistance from the state, including MI Works support in cooperation with local community colleges, and from the cities of Hazel Park and Troy.

“When leading global companies like LG invest in Michigan and create hundreds of good, high-paying jobs here, it speaks volumes about the strong business and mobility climate in the state today,” Governor Rick Snyder said. “LG’s great technological advancements and our outstanding workforce will help pave the way for the vehicles of the future right here in Michigan.”

Vehicle components represent the fastest-growing business of global technology leader LG Electronics. LG’s first-half 2017 global revenues for vehicle components were more than $1.5 billion, a 43 percent increase from the same period last year, thanks in large part to the successful collaboration with General Motors on the popular Chevrolet Bolt EV. Honored by GM as a global supplier of the year, LG Electronics received the coveted 2017 GM Innovation Award.

LG’s jobs and investment commitment in Michigan coincides with two other major LG projects in the United States. The company will soon begin construction on the world’s most advanced production plant for washing machines in Clarksville, Tenn. This $250-million factory will create 600 new U.S jobs by 2019. In addition, construction is under way on the new LG North American Headquarters in Englewood Cliffs, N.J., a $300-million project that is expected to increase LG’s local employment there from 500 today to more than 1,000 by 2019.