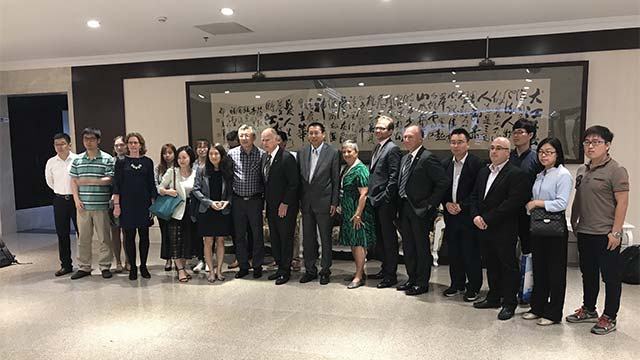 China and California are leaders in the rapidly growing market for zero-emission vehicles (ZEVs), which this year surpassed two million cars, trucks and buses worldwide. China accounts for about 40 percent of the global market while California is responsible for more than 50 percent of sales in the United States. China’s production of zero-emission vehicles has skyrocketed over the past two years.

Furthering that leadership, California will establish a new working group through the China-US ZEV Policy Lab at UC Davis to expand cooperation with Chinese zero-emission vehicle and battery technology companies. The lab is a unique partnership established in 2014 between UC Davis Institute of Transportation Studies and the China Automotive Technology and Research Center (CATARC), both leaders in zero-emission technology and policy.

The meeting included officials from Chinese automakers such as BYD, Beijing Auto Group, Great Wall, Geely, Dongfeng Xiao Kang, Yangtze Motors and a half dozen other vehicle and battery companies. Discussions with the companies centered on plans for developing new models of zero-emission vehicles and support needed to enter the U.S. market.

Also participating in the meeting was Matt Petersen, chief sustainability officer for the city of Los Angeles, who emphasized the important role local governments play in transportation electrification and affirmed the city’s commitment to a zero-emission future. “In Los Angeles, we want to make electric cars as common as movie stars,” said Peterson.

Following the meeting, Chair Nichols gave a presentation on California’s ZEV mandate and complementary policies to an audience of Chinese automakers and government officials during a workshop hosted by CATARC.

In California, the transportation sector is responsible for nearly 40 percent of greenhouse gas emissions and is also by far the largest source of smog-causing pollution and fine particle pollution. With the nation’s largest market for cars and light-duty trucks, California pioneered regulations to clean up emissions, including a zero-emission vehicle initiative that dates back to 1990.

Today, some 37 different battery-powered, plug-in hybrid, and fuel cell electric vehicle models are available in California. As of March, California had more than 280,000 zero-emission vehicles on the roads, and the Governor has set a goal of putting 1.5 million ZEVs on the roads by 2025 and 4-5 million by 2030.

California’s market has shown strong growth recently, with ZEVs accounting for more than 10 percent of new vehicles in 16 California cities in 2016, according to a recent analysis by the International Council on Clean Transportation.  In the first quarter of 2017, ZEVs accounted for nearly 5 percent of new car sales statewide.

Since 2014, ZEV sales in China have increased nearly sevenfold to 509,000 vehicles in 2016, making China the largest market and strongest driver of global market growth. A national “road map” for the country’s auto market aims for ZEVs to account for at least 20 percent of total vehicle sales by 2025, or about 7 million vehicles a year.

The meeting with Chinese automakers and battery manufacturers is part of a week-long trip to Chengdu, Nanjing and Beijing to expand California’s close climate ties to China and reaffirm the commitment of subnational governments to reduce greenhouse gas emissions.