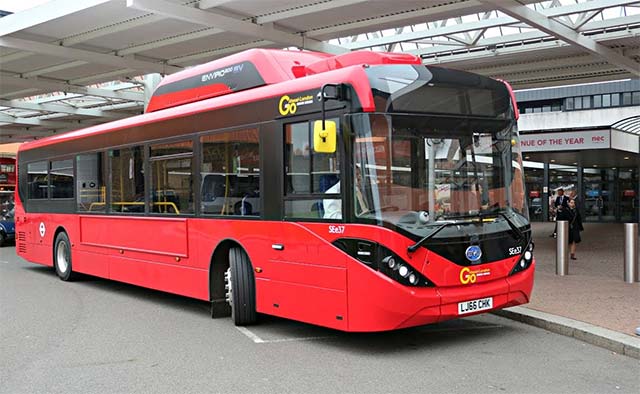 The BYD ADL electric bus partnership has been selected as preferred bidder by RATP Dev London for the latter’s order of a total of 36 10.8m pure electric buses.

Following a comprehensive technical evaluation of zero emissions buses from a range of electric bus suppliers, RATP Dev London has entered into a letter of intent for the procurement of BYD ADL’s Enviro200 electric vehicle. The commercial terms for the supply of the vehicles are currently being negotiated, with contract signature due shortly, for vehicle delivery in spring 2018.

The new buses would be based at London United’s Shepherd’s Bush garage and be deployed on two high frequency TfL bus routes: C1 from Victoria to White City and 70 from South Kensington to Chiswick. These two routes, one of which is already operated by RATP Dev London, are being converted by RATP Dev London to full electric operation following the company’s recent success in winning these routes through Transport for London’s tendering process.

The BYD ADL Enviro200 10.8m is a new model designed for more restrictive route conditions than the 51 12m models already in service on the London bus network. Many London streets feature sharp corners and the smaller vehicle – still capable of accommodating 76 passengers – is more appropriate for some routes. Like all ADL BYD models, the new buses will be guaranteed to complete a full day’s duty cycle without the need for recharging.

Once concluded, the new order will bring the number of ADL BYD electric buses in London to over 100, by some way the largest volume of full size electric buses in service in any major European city. The successful and long term BYD ADL partnership agreement has recently been renewed and extended to cover a broader range of exciting products meeting many UK bus model requirements.

A Memorandum of Understanding (MoU) between RATP Dev London and BYD, as prime contractor, was signed today at the Guangdong Economic and Trade Co-operation Conference held in central London. BYD’s HQ is located in Shenzhen, the economic hub of Guangdong Province. At today’s ceremony, the MoU was signed by BYD Europe’s Managing Director Isbrand Ho and Tim Jackson, CEO of RATP Dev UK, in front of Hu Chunhua, Party Secretary of Guangdong Province.

Tim Jackson, CEO of RATP Dev’s UK operations and chairman of its London bus operations, said that “Our engineering staff have conducted a thorough evaluation of the electric buses currently available in the UK and are pleased to have selected the BYD ADL product for launching our electric operations in London at this time. We look forward to working intensively with BYD ADL over the next few weeks to finalise the terms of this important investment. Our client TfL and our parent RATP are watching this project with great interest and we count on close collaboration with BYD ADL to implement it successfully.”

Isbrand Ho, MD of BYD Europe, said: “This is a real vote of confidence in the strength of the BYD/ADL partnership and of our proven product range. The first fleet we supplied in London has performed well and now Londoners will benefit from more of our zero pollution and cost effective electric buses. We are confident of being able to announce further orders shortly”.

Colin Robertson, CEO of Alexander Dennis Limited (ADL) said: “The ADL/BYD partnership goes from strength to strength. British operators value the attractive and proven combination of stylish ADL bodies and advanced BYD electric technology and of course the fact that our buses are British built. We look forward to making more announcements imminently”.