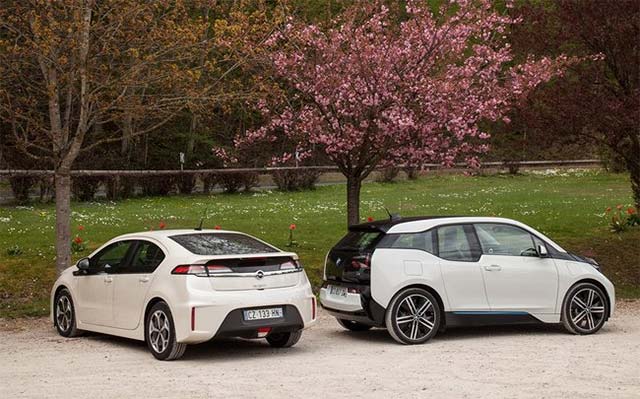 This year plug-in electric passenger car sales have surpassed the 100,000 units in May, leading to a PEV market share of 1.4%, with year-to-date registrations growing 27% compared to the same period last year.

Sales are expected to accelerate in the coming months, with the introduction of new models and improved versions of existing ones. It should also be noted that several potentially popular EV models have limited availability, while other consumers are waiting for newer models which already have been announced, thus depressing the actual EV market.

Plug-in Light Commercial Vehicles (N1 Category) were up 7% in May to 952 units, with the best-selling models being the Renault Kangoo ZE (339 units), Nissan e-NV200 (237) and Citroën Berlingo EV (90). With an improved version of the Renault Kangoo ZE coming in a few months, this segment is expected to grow significantly in the second half of 2017. Leading countries for LCV PEV market share are Norway (2.1%), Germany and France, both with 1.1% share.

May data shows the European plug-in electric vehicle market growing, with registrations up 48% year-on-year, to 20,568 units, a 21% increase regarding the previous month of April.

First Place – With the quality glitches behind in the last weeks of the month, the Renault Zoe had the opportunity to deliver 2,065 units, most of them (1,230) being delivered in its home market, but also with good performances in Germany (271 units), Norway (108) and Austria (77).

Second Place – Good news for the Mitsubishi Outlander PHEV, not only it retained the Second Place in May, with 1,842 units, it did so with an increase in registrations (+28%) regarding the same month last year, bucking the recent trend of decreasing sales. The largest markets for the Japanese SUV were the United Kingdom, with 700 units, Norway (343) and Sweden (297);

Third Place – Despite a new Nissan Leaf being expected next September, the current one still managed to reach Third Place in May, with 1,378 registrations, with the Japanese model managing to increase sales (+8%) regarding last year, thanks to heavy discounts, regarding individual countries, the 153 registrations in Sweden deserve a special mention, as the nameplate has been experiencing a revival in the Scandinavian country.

Fourth Place – The all-electric BMW i3 was Fourth, with 1,227 registrations, with sales up 223%, as the 33 kWh version sales boost continues to be felt, with strong deliveries in its home Germany (201 units), but the big market has been Norway, which absorbed an additional 410 units last month.

Fifth Place – A common sight in the ranking, and with deliveries growing 29% YoY, the VW Passat GTE climbed to the Fifth Position in May, with 1,170 units, profiting from strong results in Norway (340 units), Sweden (342 deliveries), and Germany (177).

Sixth Place – The Mercedes GLC350e was Sixth, with 1,105 units registered, with the Mercedes SUV having record results in Norway (248 units), but also in France (178) and Germany (165). Considering that the three-pointed-star model does not have a direct rival yet, it is expected to continue to profit for being on the vortex of the two strongest trends of the automotive market in Europe: SUVs and plug-in electric cars.