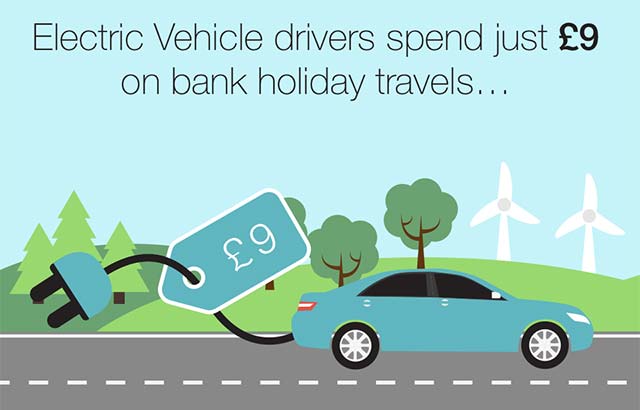 Britain’s electric vehicle drivers are set to save £30 on travel costs compared to traditional petrol car users, when travelling this half term.

That’s the same price as a family of four’s admission into London Tower Bridge exhibition, 15 donkey rides on Blackpool beach or enough Cornish pasties to feed the family for breakfast, lunch and dinner.

The findings come from NewMotion, Europe’s largest provider of smart charging solutions for electric vehicles.  As more and more Britons opt to go on holiday within the UK the company urges motorists’ to make a positive change and to ditch petrol vehicles and go electric.

13 million Britons were tipped to make a car based journey this May bank holiday, with an average driving distance of 178 miles. This will cost drivers around £44 for a weekend getaway, before accommodation, entertainment and food and drinks costs have been taken into account.

By contrast, electric vehicle drivers will spend on average only £9 travelling the same distance, from one single charge, making for a considerably more cost effective weekend away.

The findings are based on NewMotion calculations comparing motoring costs of a Honda Civic and a Nissan Leaf travelling 178 miles (~286km). The Honda Civic driver will spend £44 on fuel compared to a Nissan Leaf driver spending £9 on charging.

UK Country Manager for NewMotion, Sander van der Veen says, “More than ever before, people are in a strong position to make a positive impact on the way they travel.  The government offer grants for people looking to install smart charging points in their home, and more and more car manufacturers are making electric vehicles that are affordable, with longer driving range (almost 250 miles on a full battery) and lower running costs than traditional fuel cars.

“As people start to think about taking advantage of the time away from work and taking a break from the routine, costs become an increasing important factor in holiday planning.”