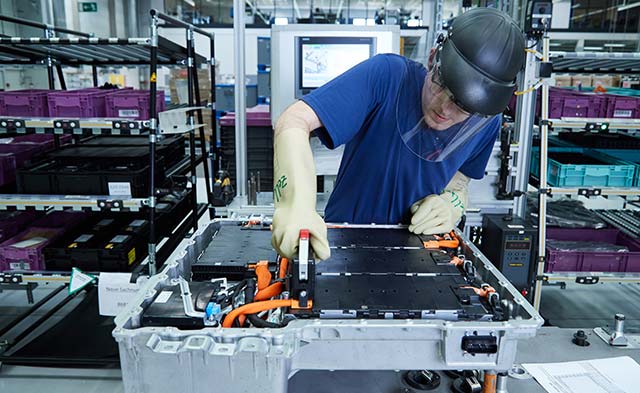 The BMW Group announced its plans to expand electro-mobility.

At a meeting with Bavarian State Minister of Economic Affairs, Ilse Aigner, Oliver Zipse, member of the Board of Management of the BMW Group, responsible for Production said: “The BMW Group is a pioneer and an innovator in electro-mobility. We will begin producing the fully electric BMW iNEXT here at our Dingolfing plant in 2021. This decision will further strengthen our German production locations, which, with their innovation capabilities, play a leading role all across our production network. In the area of electro-mobility, in particular, our aim is to ensure end-to-end systems expertise within the company.”

BMW Group plants worldwide will benefit from the German sites’ production expertise and technology knowhow. At nine locations around the globe, the company already produces nine electrified models, including eight plug-in hybrids. The all-electric BMW i3, which is manufactured at BMW Group Plant Leipzig, will be joined by the first fully electric MINI in 2019, a fully electric BMW X3 in 2020 and the BMW iNEXT from 2021. The Dingolfing plant does produce components such as high-voltage batteries and electric engines for these vehicles.

Oliver Zipse: “Going forward, the BMW production system will create structures that enable our production facilities to build models with a combustion engine, plug-in hybrid or fully electric drive train at the same time. This will give us unique flexibility and put us in an optimal position on the cost side.”

BMW Group Plant Dingolfing: Competence Centre for components for fully and partially electrified vehicles
With its long experience in the field of electro-mobility, state-of-the-art production equipment and specially trained staff, the Dingolfing location, together with the Landshut plant, forms the BMW Group’s competence centre for the production of high-voltage batteries and electric engines.

Dingolfing has been producing high-voltage batteries for BMW i models since 2013. In recent years, new production lines for high-voltage batteries and electric engines for BMW Group plug-in hybrids have also been installed. Dingolfing additionally builds the plug-in hybrid versions of the BMW 5 Series and the BMW 7 Series. From 2021, the plant will also produce a fully electric vehicle on site: the BMW iNEXT. Dingolfing will therefore become the second BMW Group location after Leipzig to build a fully electric BMW i vehicle.

Dr. Andreas Wendt, head of BMW Group Plant Dingolfing: “Dingolfing has a lot of experience and expertise in ramping up complex products – making it the ideal location for production of the BMW iNEXT. With its pure-electric drive train, larger dimensions and new technologies, such as autonomous driving and digital connectivity, the BMW iNEXT will be a real innovation driver. We are proud to have the opportunity to build this car here in Dingolfing. This year, we will be celebrating BMW’s 50th anniversary in Lower Bavaria. For me, the BMW iNEXT clearly signals the start of a new era and our intention to make the next 50 years just as successful.”

The BMW Group has invested a total of more than 100 million euros in electro-mobility at the Dingolfing site to date, making the plant more competitive for the future and securing jobs. Several hundred Dingolfing employees already work in areas related to e-mobility. Further jobs will be created over the medium term as production ramps up.

Stefan Schmid, Chairman of the Works Council at Plant Dingolfing: “At Dingolfing, we put our faith in e-mobility and the creation of sustainable jobs at an early stage. That is now paying off. The BMW iNEXT will help ensure the plant’s workload over the next few years and secure its technological edge. This will enable us to offer employees good prospects for the future.”

Electrification of model series moving forwards
The BMW Group is the world’s third-largest manufacturer of electric vehicles and delivered over 62,000 electrified vehicles to customers last year, including more than 25,500 fully electric BMW i3s. With 2,864 new vehicle registrations in 2016 (+ 26%), the all-electric BMW i3 was the most successful electric vehicle in Germany.

In the first quarter of 2017, the company delivered almost 20,000 electrified models to customers around the world. The aim is to sell a total of 100,000 electrified vehicles worldwide this year.

By 2025, the BMW Group expects electrified vehicles to account for between 15-25% of sales. With its high level of flexibility, the BMW Group production system can respond quickly to changing market demands and will be able to integrate different drive forms directly into ongoing production as required.

BMW Group Plant Leipzig at the heart of the BMW i success story
Ten years ago, development of a fully electric BMW Group vehicle got underway with the launch of project i. BMW Group Plant Leipzig has made a decisive contribution to this undertaking: As the nucleus of electro-mobility at the company, the plant has produced the BMW i3 since 2013 and the BMW i8 since 2014. Project i laid the foundation for the new production technologies and processes that made this development possible. This technological knowhow is not only reflected in the qualities of BMW eDrive components, but also in flexible and quality-based production at Plant Dingolfing.