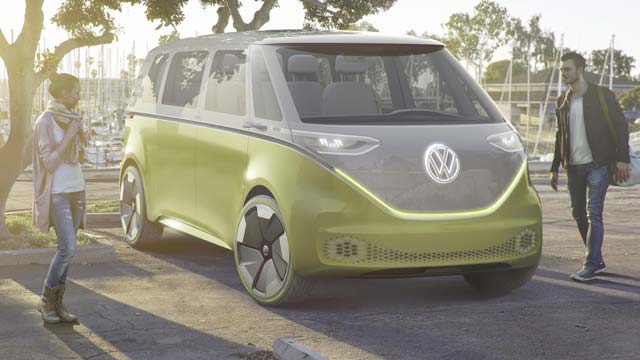 The Volkswagen I.D. BUZZ concept, first shown at the Detroit Auto Show in January, has been named Concept Car of the Year in Popular Mechanics annual Automotive Excellence Awards. Chosen by the magazine’s expert editorial team, these awards recognize the best in automotive design, execution and technology.

“We are thrilled for the I.D. BUZZ to receive the Concept Car of the Year award,” says Hinrich J. Woebcken, CEO of the North American Region, Volkswagen. “This concept represents how Volkswagen is combining our rich history with fresh takes on modern mobility and the reaction to the car has been extraordinary.”

“For our Concept Car of the Year category, the criteria was pretty simple: Which concept car do we most fervently hope actually reaches production?” says Ezra Dyer, Automotive Editor, Popular Mechanics. “The appealing thing about the I.D. BUZZ is that it doesn’t come across as a complete flight of fancy. Volkswagen could build an electric Microbus throwback—and we hope it does.”

Even though there are seven decades between Volkswagen’s oldest and newest MPV, the I.D. BUZZ undoubtedly has its predecessor’s genes: maximum utilization of space on the footprint of a medium-size passenger car. On top of that comes multi-variable seating and interactive connectivity. Thanks to the extended MEB XL platform, this 194.6-inch long, 77.7-inch wide and 77.3-inch high concept vehicle provides an extraordinary amount of interior space for its class.

The new electric MPV is the second model in the I.D. range and provides a look ahead to the future. In particular, it shows that the Modular Electric Drive Matrix (MEB) is well suited to larger vehicles as well: batteries and the drive system are housed within the floor, above which driver and passengers find lots of space for traveling in comfort.