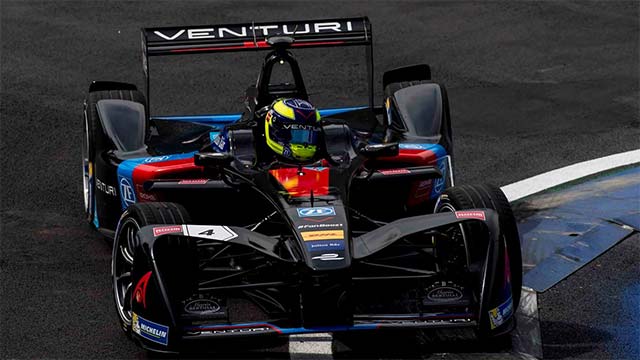 The 28 year old is standing in for Maro Engel, who has a clashing DTM commitment for Mercedes on May 20th.

Dillmann has already driven the Venturi VM200-FE-02, when he stood in for Stephane Sarrazin for the shakedown in last month’s Mexico City ePrix.

“I’m delighted with having the chance of contesting the race in France as Venturi`s reserve driver,” said Dillmann. “Formula E is an exciting place to be for a driver – with thrilling motor racing and interesting technical developments. It goes without saying that it’s my goal to contest a full season in this series in the future.”

Dillmann has also been a race winner in Formula 3, GP2 and the World Endurance Championship, and the team is confident that he’s the right choice to help them add to their tally of three points so far this season.

Grandstand tickets for the Paris ePrix are now sold-out, but entry to the Allianz eVillage fan zone are still available.

In a related news, Formula E confirmed that it has joined forces with CBMM, who are joining as an Official Sponsor for a number of select events for the remainder of the 2016/17 FIA Formula E Championship.

The involvement of CBMM in Mexico City, Paris and the inaugural race in New York, highlights the launch of the Niobium Materials Technology Project which promotes downstream development work in the mobility sector for global manufacturers.

Formula E demonstrates the potential of sustainable mobility and is closely aligned with the Niobium Materials Technology Project’s aims to improve the performance, safety and cost profile of environmentally friendly transport. The sponsorship will specifically improve awareness of Niobium technology amongst the technical community and enable knowledge sharing about Niobium’s benefits in the areas of weight saving due to the use of high strength steels and vehicle electrification.

Most car manufacturers already use Niobium in mass market vehicles in micro alloyed high strength steel. The sponsorship with Formula E will highlight how the company’s research over previous decades is able to transform the dynamics of future electric vehicles.