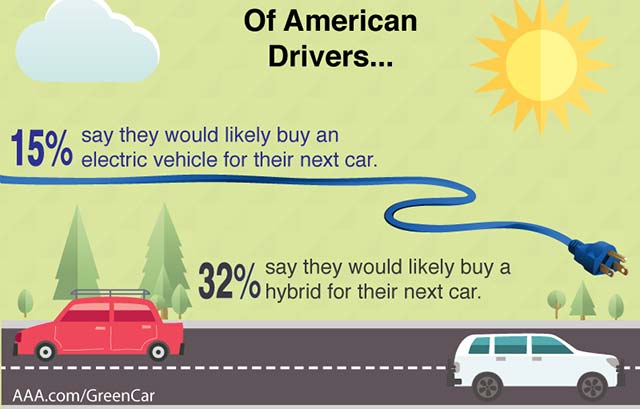 Despite lower gas prices, a new AAA study reveals that consumer interest in electric vehicles remains high, with the survey showing that more than 30 million Americans are likely to buy an electric vehicle for their next car.

With rising sales, longer ranges and lower costs, AAA predicts a strong future for electric vehicles, and announces the top electric, hybrid and other efficient vehicles in its independent, rigorous test-track evaluation.

“With their lower ownership costs and compatibility with emerging autonomous technologies, electric vehicles are poised to be a key vehicle of the future,” said Greg Brannon, AAA’s director of Automotive Engineering. “Tesla — a standout in AAA’s evaluations — has helped widen the appeal of electric vehicles by showing they can be stylish, performance-focused and filled with cutting-edge technology.”

Concern for the environment remains the primary motivating factor for electric vehicle shoppers, but AAA also found that lower long-term costs, desire for the latest technology and access to car pool lanes are all influential. With their extended range and flexibility, hybrid vehicles are also desirable to Americans, with nearly one third (32 percent) likely to buy the gasoline- and battery-powered alternative.

Beyond electric and hybrid vehicles, AAA’s survey found that fuel economy remains a major purchase consideration for all U.S. drivers, with 70 percent rating it as an important factor in selecting any vehicle – equal to the importance of the cost, crash rating and performance – ahead of safety technology (50%), brand (48%), style, color and design (46%) and smartphone connectivity (34%).

With a focus on the future, the Automobile Club of Southern California’s Automotive Research Center rates and ranks electric vehicles, hybrids, compressed natural gas-powered (CNG), diesels and high fuel economy gasoline-powered vehicles for the annual AAA Green Car Guide.  Vehicles are rated on the criteria that matter most to car buyers, including ride quality, safety and performance.

“While desire for green vehicles is strong, making the leap to an electric, hybrid or other fuel efficient vehicles can be daunting to car shoppers,” said Megan McKernan, manager of Automotive Research Center. “AAA’s rigorous evaluations help take the guesswork out by providing an unbiased evaluation of these vehicles based on more than a dozen individual criteria.”

Winners, detailed evaluation criteria, vehicle reviews and an in-depth analysis of the green vehicle industry can be found at AAA.com/greencar.

While electric vehicles are an attractive option for car shoppers, AAA found that more than half of Americans are hesitant to make the switch due to “range anxiety” – the concern over running out of charge or having too few locations to charge a vehicle. This fear persists despite the fact that U.S. drivers report an average round-trip commute length (31 miles) and time (46 minutes) that are well within the range of the more than 100 miles of range that most electric vehicles offer.

“Range anxiety stems from seeing gas stations, not charging stations, on every corner,” continued Brannon. “While electric vehicles may not yet fit every lifestyle, the number of charging stations has quadrupled over the last five years and battery ranges support average commutes.”