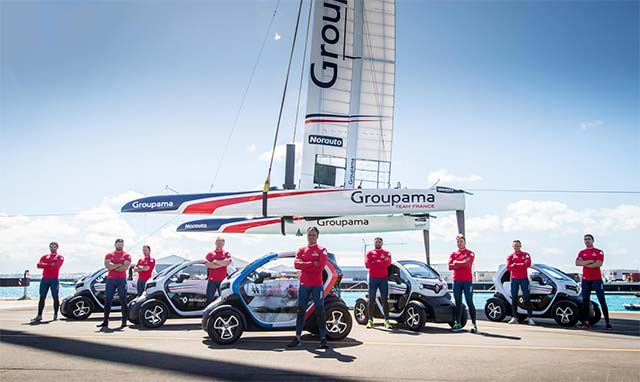 Renault has handed over the keys to ten Twizys to Groupama Team France competing for the 35th America’s Cup. The handover marks the launch of Renault Twizy, leader of electric vehicles in Latin America, in Bermuda.

The first ten Twizy EVs delivered to Groupama Team France will be used by the team to commute from their base to the America’s Cup venue.

The Renault-Nissan Alliance has sold over 430,000 electric vehicles worldwide, with 100,000 units sold by the Renault brand alone.

Renault is the EV market leader in Latin America, with the largest range of zero emission cars available to customers. More than 500 units have already been sold there since 2012 and Renault Twizy tops the ranking as the region’s best-selling EV. Renault’s EV model range also includes the ZOE supermini – which tops EV sales in Europe – and the Kangoo Van Z.E., which is also the top-selling model in its segment. It will continue to expand later in 2017 with the arrival of the Master Van Z.E.

“Renault is proud to introduce this all-electric vehicle during the America’s Cup,” said Olivier Murguet, Renault America Region Chairman. “Like the world’s finest sail boats that are competing in the America’s Cup, Renault Twizy is part of the zero emission* mobility.”

“It is easy and fun to drive, in addition to being very safe, completely silent and without any emissions during road use. Its large windows provide an incredible view of Bermuda’s stunning landscapes. In a few words, the car is in perfect harmony with Bermuda’s amazing sights,” said Juan Duque Restrepo, Importing Countries Director for Renault Americas Region.

Louis Viat, Logistics, Groupama Team France, commented: “Renault Twizy represents the best alternative to public transport or self-service scooters when looking for autonomous, safe and efficient transportation on our Bermudian commute. We are very proud to be the first users of Twizy on the island and to promote the positive impact of electrical cars to preserve the beauty of Bermuda.”