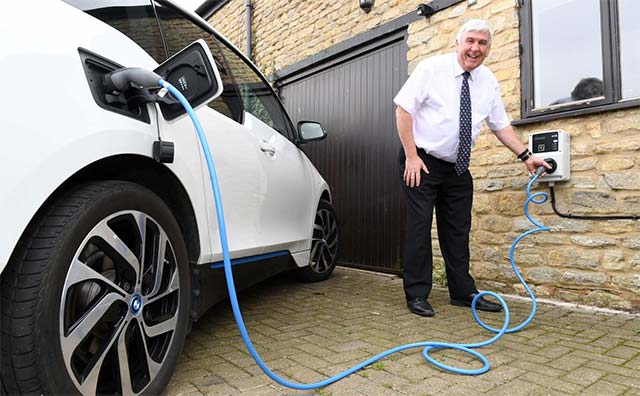 Electric vehicle owners in Milton Keynes have become the latest to benefit from free smart chargers provided by the Electric Nation project.

Milton Keynes is part of the Go Ultra Low City Scheme and it has a high level of electric vehicle ownership, which is helping to improve local air quality. In order to ensure that local electricity grids can cope with charging increasing numbers of electric vehicles at peak times, the Electric Nation project is recruiting new EV owners and providing a free* smart charger, so it can learn from the data – and the feedback – from trial participants.

Keith McLean is one of the first Electric Nation participants in Milton Keynes to have a smart charger installed for his BMW i3. Keith says “I’m delighted to be able to help with the Electric Nation research project, which aims to ensure that the UK’s local electricity networks can continue to charge the ever-growing numbers of electric vehicles. This 7kW smart charger is one of the latest, most intelligent on the market and can provide useful data on your charging history – as well as being able to charge an EV up to twice as fast as a 3kW home charge point. It has the most up to date functionality, with software updates being carried out remotely.”

Keith will be well known to many Milton Keynes residents as he was previously the Mayor of Milton Keynes, when he tried several electric vehicles, and was impressed with how easily they could be used in a city that at the time had over 200 public charging points.

When he was ready to acquire another vehicle, Keith reviewed his family’s needs and realised that in his new role working for Iain Stewart, MP for Milton Keynes South, from an office about two miles from the centre of Milton Keynes, most of his journeys would be within the Borough.

Having promoted the virtues of EVs when he was Mayor, Keith decided to purchase an electric BMW i3, and join the Electric Nation project.

A BMW spokesman said: “Since its launch in 2013 the BMW i3 has been at the vanguard of electromobility. Since that time we have sold more than 100,000 electric vehicles globally, a figure we will achieve again this year alone, such is the uptake. We are therefore delighted to support the Electric Nation trial with a view to wider use of low and zero emission vehicles in the future and the development of a smarter charging infrastructure.”

The Electric Nation trial is taking place in the WPD network areas in the Midlands, South West and South Wales. This area includes Milton Keynes, which has been awarded £9m of Go Ultra Low funding to become a showcase of what can be done to encourage the increased uptake of ultra-low emission vehicles.

The project is seeking to recruit 500-700 people buying or leasing new electric vehicles (of all makes and models, pure electric and plug-in hybrids) to take part in the largest trial of its kind. Trial participants will get a free smart charger installed.