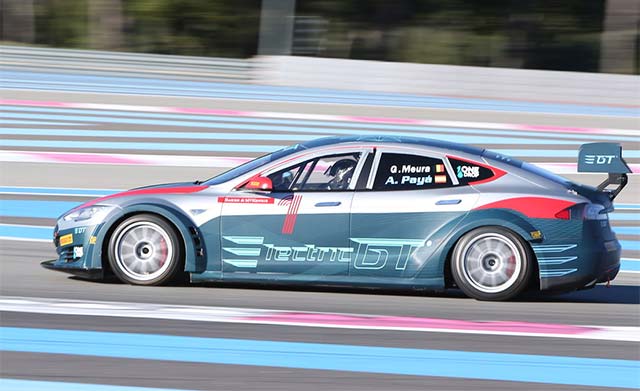 The Electric GT Championship, the world’s first 100% zero-emission GT series, is delighted to announce that the 10-round championship will kick off with a double-header at Circuit Paul Ricard on 25-26 November 2017.

This will be the first competitive running for EGT’s Tesla Model S P100Ds, with the Le Castellet circuit launching the championship, which, pending FIA approval, continues in January, followed by Portugal (March), Italy (April), Germany (May), Belgium (June), The Netherlands (July), and the U.K. (September), before finishing in Spain (October).

Each Electric GT round will be a one-day event consisting of two races, with the grids for the first decided during a 60-minute qualifying session.

With plenty of action both on and off the track, the opening event will be a weekend long festival celebrating technology, sustainability and innovation and marks the beginning of ‘The Age of Light’.

The dates for the rest of the championship are to be finalised over the next few months, as the P100D continues to be developed and preparations for the inaugural campaign entering the final stages.

Electric GT Championship CEO, Mark Gemmell, said: “We are very happy that Paul Ricard will host the first two EGP events in November. They have demonstrated a tremendous amount of enthusiasm for the championship and it will be a fantastic festival for sustainability that fans are certain to enjoy. We are working on the official dates for the rest of the campaign and are confident of getting these finalised over the coming months.”

The Electric GT Championship was announced on 9 March 2016, with the Tesla Model S P100D chosen for the first season, which will get underway in 2018. There will be 20 international drivers, both male and female, racing for 10 professional teams in identical Tesla Model S machines equipped with the latest OMP safety equipment and running on bespoke Pirelli tyres.

Rounds will consist of a 20-minute practice session, a 60-minute qualifying heat, a day race (60km) and a dusk race (60km). Each round will be a weekend-long festival of technology and innovation for sustainability, in and around the circuits.

For full details on the Season One calendar head to: http://www.electricgt.co/calendar