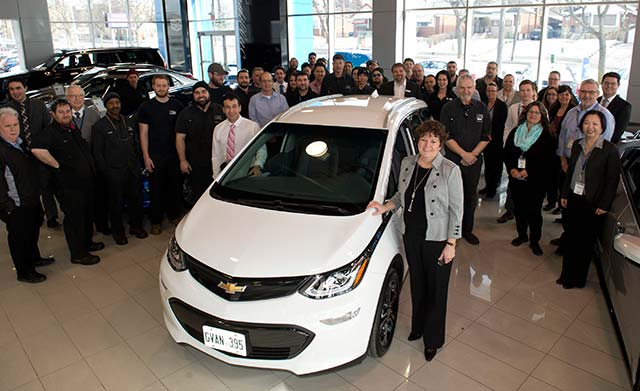 The Chevrolet Bolt EV was recognized with the 2017 Canadian Green Car Award at the Green Living Show. This is the second consecutive Car of the Year win for Chevrolet, after the Volt took home the award in 2016.

The Bolt EV, winner of this year’s Zero Emission category, was selected by a panel of top Canadian automotive journalists from among six category winners as the vehicle that best combines environmental benefits and mass-market appeal. This year, the 2017 Chevrolet Volt won in the Plug-in Hybrid category.

“It’s a true honour for Chevrolet to be recognized again with the Canadian Green Car Award, with Volt in 2016 and now the game-changing Bolt EV in 2017”, said Matthew Stokes, assistant brand manager, Chevrolet in Canada. “Chevrolet is committed to innovation and electrification and we are proud to sell more plug-in electric vehicles in Canada than any other brand.”

Named the 2017 North American Car of the Year, 2017 Green Car of the Year and 2017 Motor Trend Bar of the Year, the Bolt EV offers an U.S. EPA-estimated 383 kilometres of range on a full charge, enabling owners to go beyond average daily driving needs with range to spare.