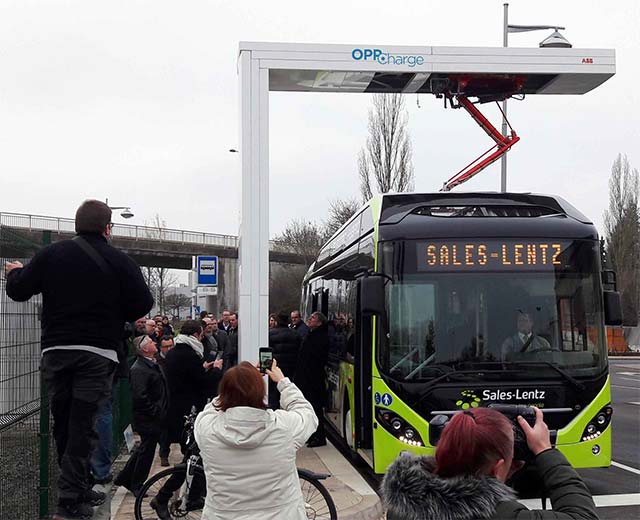 ABB has won a series of three orders to deliver its state-of-the-art fast-charging systems to customers in Europe and North America. All of the orders are for OppCharge charging stations, configured to operate with all-electric or hybrid-electric vehicles manufactured by Volvo Buses.

The largest order was from Volvo Buses for an additional 12 bus charging systems for use in Charleroi, Belgium. Combined with the three ABB systems that have already been installed, they will power what will be the largest single network of electric buses and bus-charging stations in Europe. Installation will be complete in 2018, powering 101 Volvo hybrid-electric buses serving the Wallonia public transport system.

In January, ABB inaugurated the first two OppCharge bus charging stations to power eleven electric hybrid buses running within a new zero-emissions zone in the city center of Namur. The charging stations will fully charge the electric hybrid buses with 150kW of charging power in three to six minutes during layover times at the bus route’s end points. ABB’s fast chargers are compliant with the open Interface OppCharge, which means that buses from other manufactures can also be charged.

ABB has also received an order for a fast-charger for buses from Värnamo Municipality in Sweden, through the municipality’s utility subsidiary, Värnamo Elnät. This is ABB’s first order in Sweden for a charger for electric buses. Värnamo is the first in Sweden to invest in all public transit being made up of electrified buses in the urban area. Start-up is planned for autumn 2017.

The state-of-the-art charging stations are capable of fully charging full-size hybrid-electric and all-electric buses. Both types take just three to six minutes to charge during a layover at the bus route’s end points. The technology is based on the OppCharge open-standards interface. OppCharge makes it possible to use charging stations with electric buses from different manufacturers, avoiding compatibility problems.

Finally, Novabus, the North American division of Volvo Buses announced recently that it would collaborate with ABB for the delivery of the first ABB electric bus charger in North America, to be used in Montreal as a demonstration of the technology for transit systems in the region.

As electric vehicle technology evolves, it is likely that the batteries used in electric hybrid and full electric buses will increase in size, meaning that more power will be required for charging. The modular design of ABB’s chargers and substations means that onsite charging power can be easily increased to 300kW or 450kW if required.