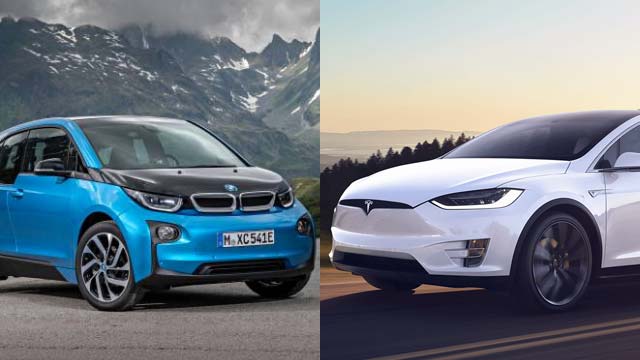 The Tesla Model X has won the 2016 Golden Steering Wheel award for the Best SUV of the year, while the BMW i3 took home the award for “Best Hybrid/Electric Car”.

First awarded in 1976, the “Golden Steering Wheel” is one of the most prestigious awards in the European automotive sector. Now in its 41st year, the competition initially involved 36 current models being voted on by magazine readers in Germany and 20 other European countries.

While the small crossover sector is relatively new, the more traditional large SUV market is still thriving. Tesla managed to secure the overall win for its new Model X, beating out the Jaguar F-Pace and new Skoda Kodiaq.

The electric SUV rewrites the rulebook in every way, with a futuristic cabin, clever ‘Falcon Wing’ doors and, most importantly, the astonishing electric powertrain capable of powering it from 0-62mph in a mere 3.2 seconds in P100D form.  Despite this, it still manages to seat six and tow up to 2.3 tonnes.”

Nearly 20,000 owners are now experiencing the quickest, smartest, and safest SUV ever, with more than 90% of owners saying they would buy Model X again.

The BMW i3 has won the 2016 Golden Steering Wheel, making it the first model taking part in the competition to have received the award for the second time in recognition of its groundbreaking lifecycle assessment.

The BMW i3 first received the Green Steering Wheel for being the “best new environment-friendly car” in 2013, even before its market launch. The jury of experts selected the BMW i3 as the winner of the 2016 Golden Steering Wheel in the “Alternative Drives” category.

The BMW i3 finished first in its category in all 21 countries. The 21 reader favourites were then put to the acid test by a jury of specialists that included racing drivers, designers, technicians, digital experts, editors-in-chief and readers. The BMW i3 was the clear winner, receiving the highest score from five out of the seven groups of experts.

The expertise gained in the development of BMW i automobiles is now used for technology transfer to the core BMW Group brands. In addition to the use of CFRP in the body structure of the new BMW 7 Series, this is particularly reflected in the integration of eDrive technology in the BMW iPerformance models with plug-in hybrid drive. After the BMW iPerformance models of the BMW 2 Series Active Tourer, the BMW 3 Series Sedan, the BMW X5, the BMW 7 Series and the BMW X1 xDrive25Le iPerformance developed exclusively for the Chinese automotive market, the new BMW 5 Series Sedan with plug-in hybrid drive will also be launched in the spring of 2017. The first plug-in hybrid model of the MINI brand is due to follow in 2017.

Consistent progress in the area of eDrive technology further increases the appeal of the BMW i3. The BMW i3 (94 Ah) with extended battery capacity (combined fuel consumption: 0.0 l/100 km; combined power consumption: 12.6 kWh/100 km; combined CO2 emissions: 0 g/km) achieves a range of up to 200 kilometers in everyday conditions and a range of up to 300 kilometers in the standard cycle. This surpasses the BMW i3 (60 Ah) – which is still available – by more than 50 percent.