Battery-electric vs. fuel cell vehicle: Which is greener? 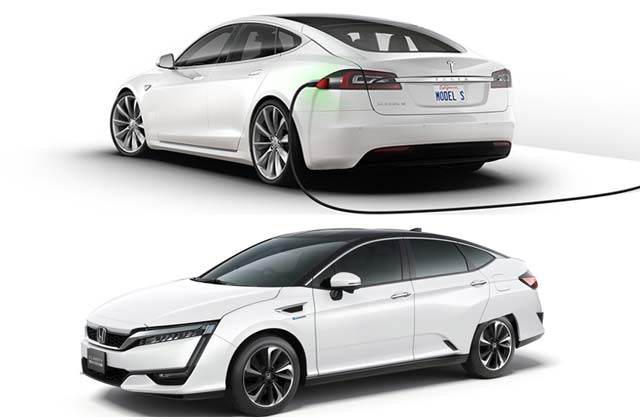 Many communities would be better off investing in electric vehicles that run on batteries instead of hydrogen fuel cells, in part because the hydrogen infrastructure provides few additional energy benefits for the community besides clean transportation.

That’s according to a study in the November issue of the journal Energy by scientists at Stanford University and the Technical University of Munich (TUM). They compared battery electric cars versus hydrogen fuel cells in a hypothetical future where the cost of electric vehicles is more affordable.

“We looked at how large-scale adoption of electric vehicles would affect total energy use in a community, for buildings as well as transportation,” said lead author Markus Felgenhauer, a doctoral candidate at TUM and former visiting scholar at the Stanford Global Climate and Energy Project (GCEP). “We found that investing in all-electric battery vehicles is a more economical choice for reducing carbon dioxide emissions, primarily due to their lower cost and significantly higher energy efficiency.”

A key question for policymakers is, which transportation technology cuts total emissions at the lowest cost – batteries or fuel cells? Beyond transportation, could hydrogen technology also provide clean energy for heating and lighting buildings, as some research suggests?

The new study is the first to address both questions.

Currently, neither energy source is entirely emissions free. Some people charge their battery electric cars by plugging into the power grid, which delivers electricity generated largely from carbon-emitting fossil fuels.

Likewise, most hydrogen fuel is derived from natural gas through an industrial process that emits carbon dioxide as a byproduct. An alternative device, called an electrolyzer, uses solar-generated electricity to split water into clean hydrogen and oxygen, but the technique is very energy

The researchers focused on California, a leader in electric vehicle transportation. In the study, the researchers created future scenarios for the Town of Los Altos Hills, a sunny, affluent community of about 8,000 residents located in Santa Clara County just a few miles from the Stanford campus.

The scenarios focused on 10 to 20 years in the future, when battery and fuel cell vehicles are expected to be in much wider use, and when solar power and electrolyzers are cost competitive with the electric grid.

One scenario for the year 2035 assumed that electric vehicles would constitute 38 percent of the town’s vehicle fleet. It also assumed that fuel cell vehicles would be powered by locally produced hydrogen made with the cheapest available electricity, be it solar generated or obtained from the grid.

Data about Los Altos Hills was fed to a computational model developed by study co-author Thomas Hamacher, a professor of electrical and computer engineering at TUM.

“We provided data on the amount of energy Los Altos Hills needs throughout the day, as well as financial data on the cost of building new energy infrastructures,” said study coauthor Matthew Pellow, a former GCEP postdoctoral scholar now with the Electric Power Research Institute. “We included the cost of making solar panels, electrolyzers, batteries and everything else. Then we told the model, given our scenario for 2035, tell us the most economical way to meet the total energy demand of the community.”

To compare each scenario’s costs to its climate benefits, the researchers also calculated the carbon dioxide emissions produced in each case.

The researchers also assessed the potential benefits of using the hydrogen infrastructure to store clean energy for use on demand. During daylight hours, electrolyzers can produce hydrogen from surplus solar power that would otherwise go to waste. That hydrogen can be stored and converted into renewable electricity, or used as a clean alternative to natural gas to heat and light buildings.

The results were definitive.

In terms of overall costs, researchers found that battery electric vehicles are better than fuel cell vehicles for reducing emissions. The analysis showed that to be cost competitive, fuel cell vehicles would have to be priced much lower than battery vehicles. However, fuel cell vehicles are likely to be significantly more expensive than battery vehicles for the foreseeable future. Another supposed benefit of hydrogen – storing surplus solar energy – didn’t pan out in our analysis either. We found that in 2035, only a small amount of solar hydrogen storage would be used for heating and lighting buildings.

While the study focused on one Bay Area town, the results are relevant for many bedroom communities with ample sunlight across California, according to the authors. They hope to analyze larger networks of communities in future studies and examine other factors that could influence consumers’ choices when deciding whether to buy a battery or fuel cell car.