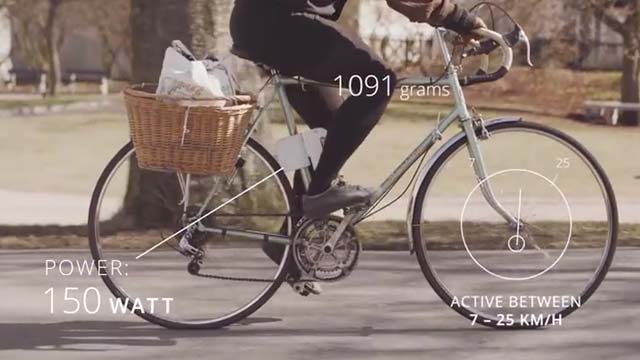 Electric bikes provide a welcome push up steep hills and are becoming increasingly popular. However, electric bicycles are expensive and conversion kits often both tricky to install and costly. To solve this, Semcon has developed a smart and inexpensive engine prototype that can be easily fitted to any bike.

As an alternative to travelling by car, cycling is beneficial for personal health and the environment, and helps reduce congestion. To encourage more people to cycle, Semcon engineers designed an electrical engine that costs less than €100 to assemble and can easily be transferred between bikes.

“The needs and wishes of the typical cyclist are what got us started. The benefits of the electrified bike are obvious, but existing solutions are expensive and complex. That’s why we developed an engine which is compatible with any bike and easily shared among friends and family,” says Anders Sundin, Technical Director at Semcon.

Making the engine small and easy to carry around was important for the developers, so the team decided on a solution with a 150-watt output weighing just over one kilogram. To maximise battery life, the engine detects the cyclist’s pedalling and is only active at speeds between 7 and 25 km/h. This ensures a comfortable, smooth and safe ride, as the smart engine interprets the cyclist’s pedalling and intentions.

The engine contains a small computer on which the software controlling it runs, making it possible for Semcon developers to develop different apps in future. This could include, for example, different modes, prioritizing speed or reach, or other applications such as theft-control or tracking.

Today, the engine is not available to end-consumers. Semcon is currently looking for investors interested in bringing the new bike engine concept to the market.