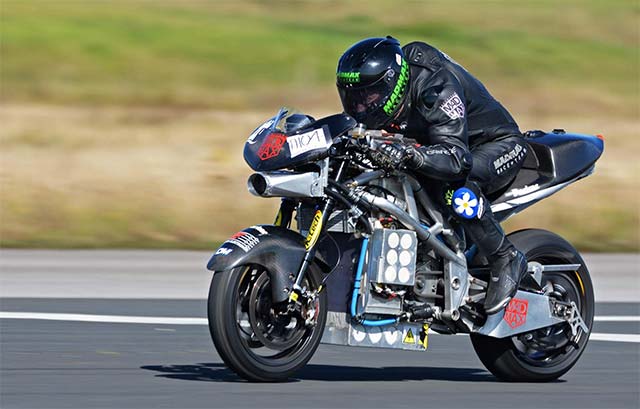 These speed records are particularly poignant to Eisenberg, as it was the bike that his MADMAX Team rider, Daley Mathison rode to the last three podium wins at the Isle of Man TT. As part of the University’s Electric Superbike Team, Daley helped the Nottingham University Team to test and engineer the e-bike, providing them with valuable feedback on the bike’s behaviour, enabling them to implement improvements. Tragically Daley was killed this year in the Superbike round at the TT. Eisenberg promised Daley’s wife Natalie Mathison that he would help make Daley’s bike, the worlds’ fastest electric bike in the world, as a tribute to the racer.

Eisenberg said “I have been planning this ACU/FIM record attempt since the Isle of Man TT incident. Daley was a very special rider and member of the MADMAX Team. The record attempts had the full blessing of his wife Natalie. I wore Daley’s special Knee sliders for all the runs and I felt that Daley rode the bike to victory with me. It was my absolute honour to do it in his memory”.

He continued “I can’t explain how happy and emotional this was. The Nottingham University Team of talented PhD students have built and engineered an incredible racing bike under the leadership of Dr Miquel Gimeno-Fabra – they should all be so proud. I hope these records will help to put electric bikes firmly on the map, as the speeds and technology certainly impressed many of the combustion powered motorbike competitors, especially as the bike was achieving the same top speeds as a Kawasaki H2 – considered the fastest and most powerful production motorbike you can buy today. I feel this is just the beginning of the electric MADness journey for the MADMAX Race team”.

The Fédération Internationale de Motocyclisme (FIM, International Motorcycling Federation) is the global governing/sanctioning body of motorcycle racing. FIM records are difficult to achieve. All riders must undergo a medical examination, be drug tested and in good health. Acquiring FIM record status ensures that strict governing standards have been applied to the management, conduct and timing of officially certified record events thus elevating the record setter to the maximum level of achievement with full recognition.

The FIM speed records are calculated by time elapsed over a distance, not trap speeds. A world record is based on two successful one way runs in each direction, within the hour. An FIM world record requires a full international scrutineer team, made up of expert track spotters and senior ACU personnel as part of the record attempts at Elvington.

About Zef Eisenberg and the MADMAX Race Team
Zef ‘MAX’ Eisenberg is the presenter of ITV4 ‘Speed Freaks’, and holds now holds more than 52 British, World, ACU, FIM and Guinness speed records. In September 2016, he survived ‘Britain’s fastest-ever motorcycle crash’ at 230mph, on a 560bhp Rolls-Royce jet turbine-powered motorcycle. He broke 11 bones, was hospitalised for three months, spent a further three months in a wheelchair and had to learn to walk again. He defied doctors by racing exactly one year after the accident on the anniversary of the crash. In May 2018, he achieved the world’s fastest motorbike on sand ever. In April/May 2019 he became the world’s only person to exceed 200mph on sands with bike and car, as well as hold the flying mile record for both also. Eisenberg races under the ‘MADMAX Race Team’, which is renowned for developing and racing the world’s most extreme machines using the best engineers in the industry.