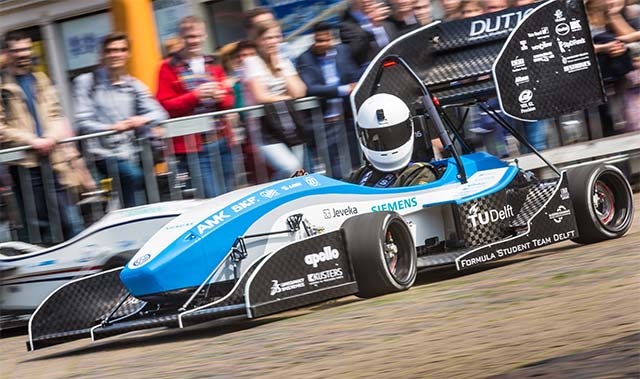 Seventy-five team members completed the car in only eight months by using the same cloud-based design, engineering and collaborative innovation applications that have transformed industry worldwide.

The “DUT16” single-seat car weighs 160 kilograms and accelerates from zero to 100 km/h in only 2.2 seconds with 177 horsepower. Its unique design features a wing on the front that is automatically adjusted by the suspension, as well as a motor, transmission and brake system in each wheel that optimize the car’s weight, speed and performance under wet or dry conditions.

Using Dassault Systèmes’ 3DEXPERIENCE platform on the cloud, FS Team Delft seamlessly collaborated on project execution, saving time and costs related to IT infrastructure and administration, all while experiencing the technical benefits of the cloud. Multi-disciplinary team members had secure access to the platform at any time, whether on site, at home, during supplier meetings or during testing. The platform’s ease of use and intuitive interface enabled students to quickly grasp mechanical, kinematics, composites and electrical applications and address complex design challenges before building the physical car.

“Without Dassault Systèmes’ 3DEXPERIENCE platform and CATIA applications on the cloud, the DUT16 wouldn’t have been possible,” said Bas aan de Stegge, Team Manager, FS Team Delft. “Our team of industrial design, applied sciences, and aerospace, mechanical and electrical engineering students has only one goal: win all Formula Student competitions! This digital platform on the cloud enabled us to work as one team to optimize parameters of the tires, chassis, suspension, drivetrain, aerodynamics and electronics in much less time.”

FS Team Delft built the DUT16 to compete in Formula Student, the largest international engineering design competition for students. This year, 500 teams from all around the world will participate in static events that evaluate each team’s business plan, costs and design strategies, as well as in dynamic events on Formula 1 circuits that test the performance of each team’s car. FS Team Delft will defend its 2015 titles in the UK from July 14-17 and in Germany from August 9-14, as well as compete in Spain from August 25-28.

“Dozens of students, starting from scratch, using the 3DEXPERIENCE platform on the cloud for the first time, to design, build, test and then race a highly competitive car in less than a year is an inspiring achievement,” said Philippe Forestier, Executive Vice President, Global Affairs and Communities, Dassault Systèmes. “It also demonstrates how the 3DEXPERIENCE platform allows for large scale implementation on the cloud with robustness to support a challenging, competitive environment.