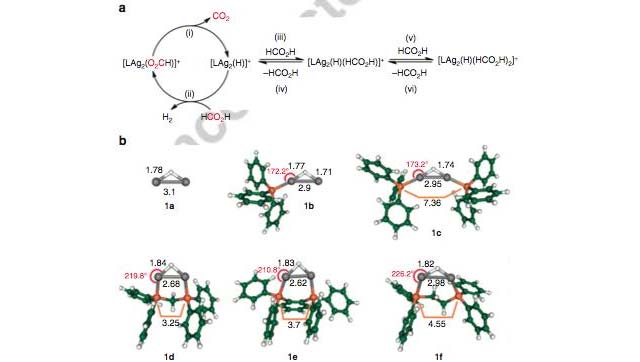 A radical new process that allows hydrogen to be efficiently sourced from liquid formic acid could be one step forward in making the dream of hydrogen-powered cars an economic reality.

Using formic acid to produce hydrogen has never been considered viable because it requires high temperatures to decompose and also produces waste by-products.

But the University of Melbourne’s Professor Richard O’Hair has led an international team of scientists in designing a molecular catalyst that forces formic acid to produce only hydrogen and carbon dioxide and at a low temperature of only 70°C.

It marks a new frontier in catalyst design at the molecular level. Such catalysts are formulated to produce highly selective chemical reactions.

“One of the grand challenges for chemists today is to develop perfect chemical reactions that proceed with 100 per cent yield and 100 per cent selectivity without forming any waste products,” Professor O’Hair said.

“With formic acid, the aim was to transform it into hydrogen and carbon dioxide, which could really lend itself to the important practical applications of hydrogen energy in the transport sector.”

While the study successfully produces hydrogen and CO2, the ultimate aim of future research will be to ensure any derivative source of hydrogen produces zero emissions.

Using a suite of powerful gas-phase techniques, the research team designed a series of silver complexes and examined their reactions with formic acid.

The team was able to identify and orchestrate the exact catalyst that would effectively manipulate a strict hydrogen/carbon dioxide-only production.

Mr Athanasios Zavras, the study’s first author and PhD student at the University of Melbourne, said having the initial gas-phase results validated using a nuclear magnetic resonance (NMR) instrument was an exciting moment.

“We were glued to our seats that day,” he said.

“I prepared solutions containing well-defined amounts of the same silver, salt and ligand combination and these were studied with a NMR that allowed us to incrementally increase the temperature from 25°C and track the formation of products.

“There was no reaction for a while, but we persevered and at 70°C, we unequivocally identified the production of hydrogen gas and carbon dioxide.

“It was an extremely exciting moment.”

One of the major challenges as the world moves towards hydrogen power is the lack of refueling infrastructure, but which the researchers say could easily be overcome if one day the industry moves to using liquid formic acid.

But Professor O’Hair notes that while the new catalyst design is an important step forward in addressing our hydrogen energy needs, there are still many barriers to overcome, such as the production of carbon dioxide and how it could potentially be recycled to regenerate formic acid.

The research has just been published in the journal Nature Communications and was funded by the Australian Research Council.