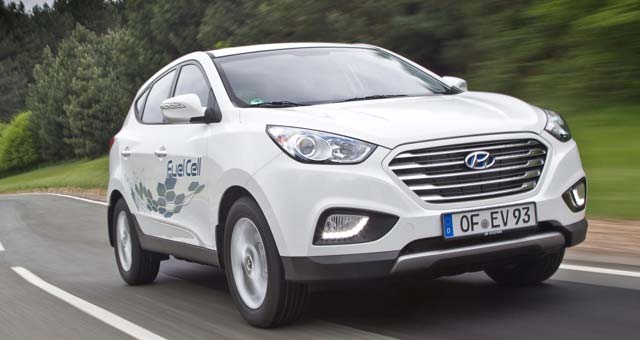 During October Hyundai Motor has delivered 50 units of its ix35 Fuel Cell for distribution to customers across Europe, extending the company’s leadership in fuel cell vehicle roll-out.

This shipment, Europe’s largest ever delivery of hydrogen-powered cars, brings the total number of Hyundai fuel cell electric vehicles in Europe to over 250, more than those of every other manufacturer combined. The cars will be supplied to a number of private and corporate customers who have chosen Hyundai’s innovative hydrogen fuel cell car.

The ix35 Fuel Cell was the first hydrogen-powered car to be mass-produced and offered for sale in Europe. The ix35 Fuel Cell cars already on the road have covered more than 1.2 million kilometres. By the end of 2015, the model will be available to buy or lease in 13 European countries, with Spain and Switzerland joining the existing 11-country distribution network.

With the refuelling infrastructure in Europe continuing to grow, Hyundai will further expand its Fuel Cell distribution network. Hyundai Motor is the first manufacturer to train and equip its dealership staff across Europe in the servicing and repair of Fuel Cell Electric Vehicles, to ensure a consistent level of highly informed, high quality customer service.

To support the advance of fuel cell technology Hyundai Motor Europe has been working with the Fuel Cell Hydrogen Joint Undertaking (FCH-JU) since October 2011.  Through the public-private partnership, Hyundai is helping to further research, technological development and demonstration activities in fuel cell and hydrogen energy technologies in Europe.

In 2014, Hyundai Motor also joined the Hydrogen For Innovative Vehicles (HyFIVE) project, an extension of the FCH-JU programme. The largest ever pan-European fuel-cell project, it will help to increase the hydrogen refuelling infrastructure and make the technology more accessible to drivers across Europe.

The ix35 Fuel Cell is fitted with a 100 kW (136 PS) electric motor, allowing it to reach a maximum speed of 160 km/h. It produces no harmful emissions during driving, with only water vapour coming from the tailpipe. The official driving range on a single tank of hydrogen is almost 600 kilometres, providing range in line with a conventionally-powered car.