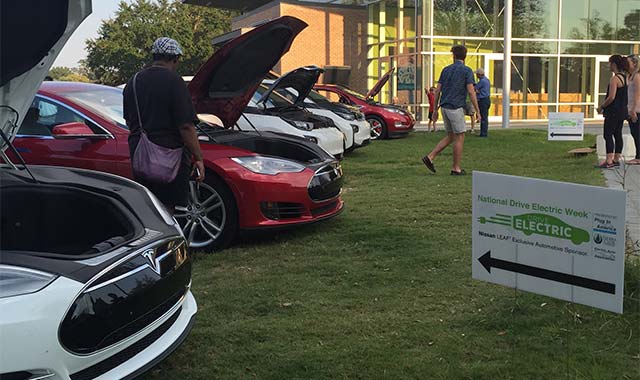 Breaking its own record again, National Drive Electric Week 2015 tallied 196 events in 187 cities this year with more than 130,000 people attending events coast-to-coast across the U.S. and Canada, in Hong Kong and New Zealand.

This year’s highlights included the world debut of the 2016 Nissan LEAF and the West Coast debut of the Chevy Bolt EV concept. These vehicles came together at Los Angeles’ event, which alone featured roughly 1,000 ride-n-drives out of nearly 9,000 total. Events from Hawaii to Maine also delivered parades, rubber-burning races, panel discussions and more. Every major plug-in model available in nearly every state was represented.

With total plug-in sales on pace to double that of plug-less hybrids for their first five years, Drive Electric Week resulted once again in EV sales, such as in Hong Kong, whose celebration included 500 test-rides in a country with only 2,500 EVs on the road.

Some events triggered first-time discussions with office holders and businesses about such EV advancements as boosting local infrastructure. Events also served as platforms for officials to make such announcements, with dozens of new charging stations inaugurated during the week. In Baltimore, Mayor Stephanie Rawlings-Blake announced the city’s installation of a fast charger, the city’s first, and a pilot program allowing city employees to test four different EVs for the city’s fleet.

National Drive Electric Week, which will be held next year from Sept. 10 through 18, 2016, showcases the cost-savings, clean-air benefits and fun of plug-ins. Plug In America, the Sierra Club and the Electric Auto Association team up to support events organized by local groups.

Perhaps the most productive activity of the week: James Haberberger and his wife, Katie Epps, drove to the hospital from the Bluffton, SC event James organized to welcome their son, Conor Alexander Epps, in to the world. A few days later, James reported, “my son Conor had his first ride in an electric car as we brought home our new bundle of joy.”

Nissan and its all-electric LEAF have served as the event’s exclusive automotive sponsor since 2013. ClipperCreek, SunPower and Schneider Electric are also national sponsors and PlugShare is media sponsor.