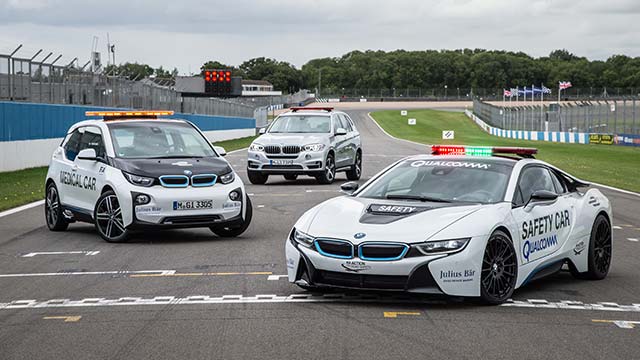 BMW announced that it will continue as official vehicle partner for the 2015-2016 FIA Formula E Championship.

The German luxury car manufacturer, who supplied course cars throughout the inaugural Formula E season, will bring a fleet of its highly advanced fully-electric and hybrid vehicles to every race with the addition of two BMW C evolution electric scooters and a BMW X5 xDrive40e plug-in hybrid.

The futuristic BMW i8 sports car will once again be used as the Qualcomm Safety Car and the all-electric BMW i3 performing the role of Medical Car.

Added to which, a pair of BMW C evolution electric scooters and a BMW X5 xDrive40e plug-in hybrid (fuel consumption combined: 3.4–3.3 l/100 km / 83.1–85.6 mpg imp; CO2 emissions combined: 78–77 g/km; figures based on the EU test cycle, may vary depending on the tyre format specified) will be making their Formula E debuts, as models from other BMW Group brands join the BMW i cars in the eDrive family.

The BMW i8 will also continue to be powered by Qualcomm’s wireless charging technology and the advanced Halo system which will see charging time reduced by halve.

Aug 26, 2015Blagojce Krivevski
Nissan and Foster + Partners to Rethink the ‘Fuel Station of the Future’Plug-in Car Grant Extended Until February 2016