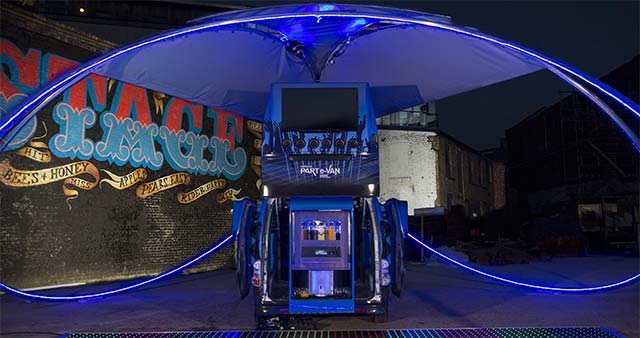 Nissan unveiled a special version of the all-electric e-NV200 ahead of the UEFA Champions League Final.

Nissan has transformed its all-electric e-NV200 into the ultimate party on wheels.

The vehicle – called the PART e-VAN and powered by the 100% electric e-NV200 – will charge into Berlin for its inaugural reveal tonight ahead of Saturday’s UEFA Champions League Final, before exciting fans outside The Olympiastadion prior to kick-off.

Some of the unique van’s standout attributes include a dazzling disco ball solar panel array on the roof which absorbs daylight to power some of this one-off vehicle’s features, an augmented reality system where users will be able to jump into their own party scene before sharing it with friends on social media and a custom-made sound system capable of throwing the best silent disco party.

Nearly a year after it first came off the production line in Barcelona, Spain, Nissan has highlighted the customisable capacity of its electric van by creating this all-electric rolling party – the PART e-VAN – highlighting to potential customers that innovation can lead to pure excitement for a business.

Following its debut in Berlin the PART e-VAN will go on a European road show with its second stop scheduled for the endurance racing spectacle, 24 Hours of Le Mans, before travelling throughout Europe.

The van’s key features:
– A DJ booth on the roof with sound system and silent disco capabilities
– A disco ball solar panel array on the roof of the van which feeds power to the van
– A cocktail maker which will supply electric-inspired cocktails
– Two independent augmented reality screens on the side panels of the vehicle which allow users to join their own party in a virtual reality
– An LED dance floor at the back of the vehicle
– A fridge for drinks
– A six metre high light-up canopy[wzslider height=”400″ lightbox=”true”]