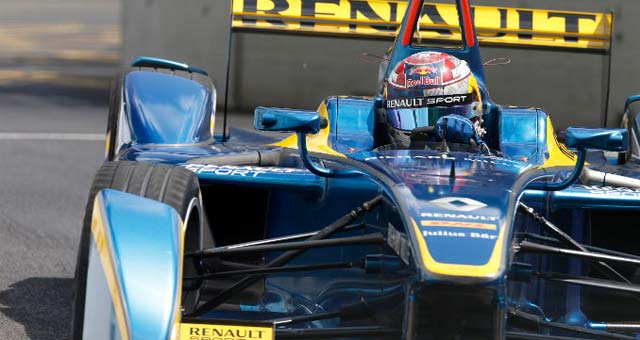 Former F1 driver Sebastien Buemi went for a metaphorical walk in the beautiful Battersea Park and came back with a fighting chance of winning the FIA Formula E Championship.

Pre-weekend the e.dams-Renault driver was 23 points behind Nelson Piquet Jr in the standings, but his second win from pole position (and his third win in total) has reduced that deficit to just five points.

Buemi did it in style too. With a temporary barrier erected in order to avoid a huge bump on the entry to Turn 1, it was agreed that the race would start behind the Qualcomm Safety Car. Buemi timed his getaway to perfection to ensure he was under no pressure into the next heavy braking zone at Turn 3.

In the second half of the race Daniel Abt crashed his Audi Sport ABT car into the wall on the exit of the final corner, erasing all of Buemi’s advantage, but once again he nailed the restart to score a resounding win.

With team-mate Nicolas Prost finishing seventh, it was an especially good day for e.dams-Renault who became the first ever Formula E teams’ champions.

In contrast it was a testing day for Piquet and his NEXTEV TCR team. From fifth on the grid he was always going to have his work cut out to move forward on the tight, heavily-cambered Battersea Park track.

But he quickly got onto the back of Lucas di Grassi and had a good run for third. As they went side by side the cars touched on the straight and Piquet was forced to run deep into the chicane and very nearly hit the wall. With his exit heavily compromised, Jean-Eric Vergne took full advantage to nip by and steal fourth.

After the car-swap pitstop, Piquet was once again on di Grassi’s tail. This time he used his FanBoost to almost draw level with the Audi Sport ABT entry, but di Grassi defended well and in the closing stages upped his pace to pull well clear.

Indeed di Grassi set the Visa Fastest Lap during his late surge, and combined with fourth place, it means he’s now just 13 points behind in the championship.

Despite a very strong race to second, Jerome D’Ambrosio’s slim title hopes have ended, but the Dragon Racing driver was still very pleased with another podium finish.

After passing Piquet, Vergne closed down di Grassi and with all four wheels locked up, pulled off a great passing move for third. In the second part of the race his pace was limited by a power issue, but he was still pleased with third.

Like D’Ambrosio, Prost and Sam Bird saw their slim title hopes end in Battersea. After a troubled qualifying, Bird was fast in the race, but a slow pitstop cost him a shot at a top-five finish. Still he overtook Prost and Loic Duval, who was suffering with a lack of top speed, in the closing stages to take sixth.

Duval finished eighth for Dragon, while Oliver Turvey was the best-placed of the five debutants, coming home ninth. It should have been much better, but an over-long pitstop cost him at least two places.

The final point went to Stephane Sarrazin. The Venturi driver had been quick all day, but a mistake in qualifying cost him dearly. But with Bruno Senna (Mahindra) and Salvador Duran (Amlin Aguri) picking up pitlane speeding penalties, he was promoted into the points.

Now they all have to do it again. Piquet still holds the lead, but with just 13 points separating the top three – and the incredibly tricky nature of the circuit – it genuinely is too close to call.