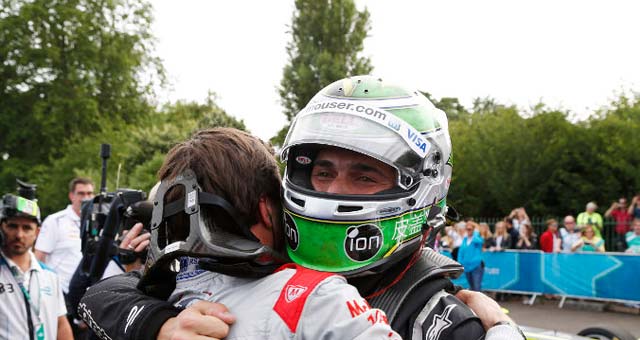 Stephane Sarrazin (Venturi) crossed the line first but was immediately handed a 49 second time-penalty for exceeding energy usage, handing the win to Bird on home soil.

After a disastrous qualifying session in which he was out on track during the worst of the rain, Piquet lined-up 16th, with both of his title rivals ahead on the road.

Heading into the final Visa London ePrix in Battersea Park just five points ahead of Sebastien Buemi, Piquet looked to have put himself out of contention, but a composed race to seventh ensured he finished the day just a single point ahead of Buemi in the standings.

But after a less-than-auspicious start of the season in which he had only a five-race contract less than two weeks before the Beijing opener, Piquet reflected on a team journey that brought him, and the NEXTEV TCR team, into title contention.

An aggressive race strategy in which the Brazilian concentrated only on his race allowed him to go an extra lap in the first car, and the safety car period prompted by Fabio Leimer’s crash with a handful of laps remaining helped bunch the pack up enough for him to pass team-mate Oliver Turvey and Salvador Duran to claim the crucial seventh place.

Jun 28, 2015Blagojce Krivevski
Virgin Racing And DS Brand Team Up To Compete In Formula E2015 KS Energy and Environment Prize for the Golf GTE and Audi A3 e-tron