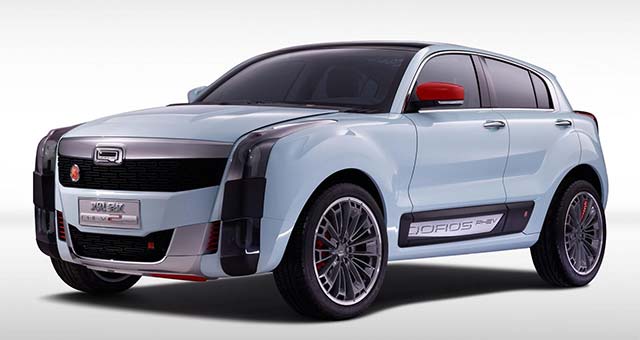 At this year’s Auto Shanghai, Qoros is unveiling the Qoros 2 SUV PHEV Concept, offering a look into the possibilities for the brand’s future.

Featuring a striking new design theme, the Qoros 2 Concept is a design study that was conceived as a possible future entrant into the world’s fastest growing passenger car segment, the B-segment.

The concept car signals Qoros’ intentions to tackle new market segments with new technologies in the future. Qoros already has three production cars, the Sedan, the Hatch and City SUV, all of which sit within the C-segment.

The 2 Concept features a long wheel base, short overhangs and a wide track, offering a reassuringly planted and rugged road presence. Styling of the lower body is strong and wide generating a muscular impression while reinforcing the same feeling of safety and security as expressed by the current models. Coupe styling lines of the upper body produce an emotive and sporty appeal.

The 2 Concept is the first car Qoros has designed to showcase a new vertical styling theme, presenting a rugged, masculine appearance to signal Qoros’ future move into the B-segment.

The lamp clusters at both the front and rear now feature a vertical design, moving away from the current horizontal theme as seen on the Hatch, Sedan and City SUV.

The Qoros 2 SUV PHEV Concept features a panoramic glass roof, which makes for a light and airy passenger cabin while incorporating a Chinese pattern in white jade. The pattern is traditionally used in Chinese windows, and synonymous with the layout of “Siheyuan” a historical unique folk house in the Hutongs in Beijing with a long history in Chinese architecture. A QR code has been embedded within the design of the roof graphics, directing viewers to the Qoros website. The driver’s side rear wheel also pays homage to the Chinese Year of the Goat celebration with a special rim inlay design.

The interior has not been seen yet, but Qoros says that its simple and minimalist interior design is based on bold graphics and incorporates some signature cabin designs from today’s existing production cars, such as elegant horizontal lines and the ‘floating’ upper instrument panel. An innovative digital instrument cluster displays all the information the driver needs in a full color display and is linked to the pop-up drive mode controller in the floor console.

As with all Qoros vehicles, the Qoros Multi Media Hub (MMH) is the central focus of the dash, through which the latest version of Qoros’ cloud-enhanced connected services platform, QorosQloud, can be accessed.

The interior is highly versatile, a cutaway floor console incorporates a large storage space while the trunk has many individual storage compartments to ensure it provides the flexibility demanded by the modern consumer’s active lifestyle; running shoes, for example, can be stored in a sealed compartment to prevent odours from entering the passenger cabin; other compartments could be used to securely store valuable equipment out of sight.

The next-generation highly-efficient small displacement turbocharged gasoline engine powers the front wheels. Drivers can choose a range of driving modes through the pop up controller that rises from the floor console:

– Pure electric for zero emissions in urban areas
– Sport for a combination of front and all-wheel drive depending on slip differences between the front and rear axles
– Permanent all-wheel-drive for maximum traction and safety depending on road surface conditions
– Hybrid for the most efficient drive. The system charges the batteries as often as possible, delivers electric power only when additional traction is needed during acceleration, or changes to all-wheel drive depending on slip differences between front and rear axles.

The 2 Concept incorporates innovative charging technology that has been inspired by aircraft fuelling, an automotive industry first. A foldable charging ‘probe’ – containing the electric charging socket – is hidden under a cover at the lower leading edge of the windscreen; it will automatically rise at the touch of a button on the dash.

Based on the “Don’t touch a cable” principle that is stipulated for the aerospace industry, the electric charging probe unfolds to a specific height to meet ‘receiver sockets’ on charge point pods at the kerb, in car lot charging bays or installed in garages at home. This innovative charging system means drivers never need to get hands dirty by touching charging socket covers and cables, and makes the charging operation safer.